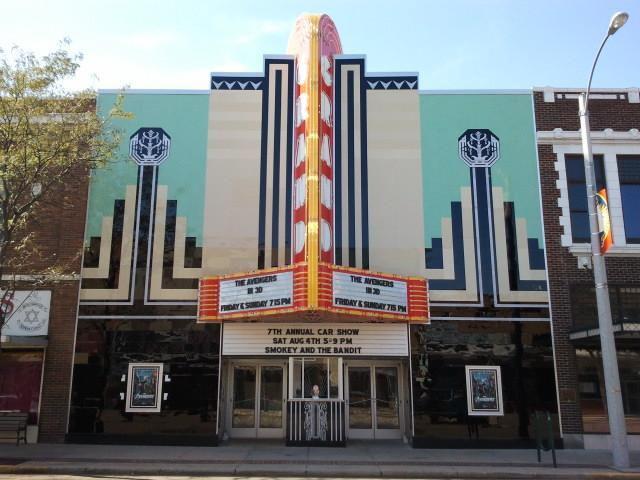 Opened May 5, 1937, built with stadium style seating (an uncommon luxury for the time), the Grand Theatre had a reputation, at least in the 1980’s, of being absolutely immaculate, even including such non-public areas as the theatre’s basement and boiler room. The man who kept it that way was supposedly named Wally Kemp. The Grand Theatre was closed in 1986 and it was thought that would be the end of its life.

It was rescued by a community group of volunteers, who over the years have restored the building back to its original splendour, especialy in their restoration of the splendid Art Deco style facade which had been rendered over.

Garrett Coble is a sophomore at Grand Island Central Catholic.He is a volunteer at the GRAND THEATRE. He wrote the following article for the Grand Island Independent.
Movie â€˜Grandâ€™
By Garrett Coble
Published: Monday January 12, 2009

Do you see that? Do you see that off in the distance? Is that a moon? Thatâ€™s no moon, thatâ€™s a space station! Wait, no, thatâ€™s a movie theater! You may have guessed that it was a theater from the Star Wars reference, but just as â€œStar Warsâ€ wasnâ€™t â€œjust some movie,â€ this theater isnâ€™t â€œjust some movie theater.â€ This particular theater is the Grand, one of the historic venues of our town. Today weâ€™ll speed back through time to look at this movie colossus with the help of some memorable movies, so strap in in case of turbulence. Just a precaution, but did you really expect more from the Grand or this DeLorean?

Safe to say, this is one theater that beats the expectations. After witnessing everything from a world war to social reform, did you really expect this staple of Grand Island to go silently into the night? Absolutely not. Rather, over time the â€œlittleâ€ Grand expanded to take its current shape. Originally the theater was sandwiched between two storefronts, eventually commandeering them in the late 1930s to make room for new restrooms and an all-important concession stand. â€œHow could a theater survive without the staple snacks of a concession stand,â€ you ask? Nightly skits involving the crew of this movie house more than made up for said lack of treats, though a small pop machine did eventually make a debut. This debut came to the applause of many, an applause which has yet to abandon the Grand.

While this is far from an â€œAmityville Horror,â€ more than a few happy customers seem to have returned to their favorite theater from beyond the grave. From voices to white figures, these benevolent spirits paint the Grand for what it is: a historic and wondrous site. Yes, when you come to enjoy the movies, thereâ€™s always someone to watch over both you and your film. But facing steep competition, how much longer could this history last?

Momma always said, â€˜Life was like a box of chocolates. You never know what youâ€™re gonna get.â€™ â€" from â€œForrest Gumpâ€

Indeed, very few people knew what the fate of the Grand would be when it was scheduled to close its wondrous doors. Luckily a small group of businesses, now known as the Grand Foundation, came to the aid of this ailing giant. But did they know what they were going to get, or did the Grand know what it was going to get? No, but the foundation found itself a worthy cause, and the Grand found itself a wacky crew to work its doors. These volunteers pour their time, soul and occasionally their sanity (as is occasionally evident) into a fine establishment worthy of more than a â€œClosedâ€ sign and some plywood. This does not do justice to the time commitment put in by these proud people. After all, theyâ€™re truly bringing the past into the future! All of that and no salary? Surely there is something amiss in this big-screen worthy storyline, some evil villain to dash these peopleâ€™s good intentions.

I want the truth!

Problem is how few youth know about the Grand. That is the fly in the ointment, as stated so well in the movie â€œA Few Good Men,â€ courtesy Col. Nathan Jessup.

Men, we live in a world with movie theaters and those theaters must depend on someone for survival. Whoâ€™s going to support them? You? You snuff the Grand for newer cinemas because we have that luxury! You have the luxury of feigning ignorance to the Grandâ€™s existence. You donâ€™t want the truth, because deep down inside in places you donâ€™t talk about at parties, you want this theater to stick around. You need it to stick around!

Amazing how well that fit in!

Well, thatâ€™s a wrap. Today weâ€™ve gone toe to toe with some of the finest films in history while taking a peek at this classic piece of our town. Remember well what youâ€™ve learned on our trip, and stop by the Grand for a screening. There is definitely history here, history to be treasured for years to come

Hereâ€™s to looking at you, Grand.

Garrett Coble is a sophomore at Grand Island Central Catholic.

From the 1930s a picture postcard view of the Grand Theater in Grand Island.

The Grand Theatre built in 1936 replaced an earlier house of the same name. Here’s the news from the September 30, 1936, issue of The Film Daily:

“Omaha, Neb. — Western Theater Supply Co., will let contracts for erection of a new Grand theater at Grand Island, Neb., and install equipment. Harry Schiller, Grand’s owner, closes his house Oct. 1. Razing of the 450-seat structure and another store building next door begins immediately to make room for the new 850-seat Grand, which will cost an estimated $85,000.”

Today’s news reveals, what I feel, is ‘true showmanship’ and I hope your patrons fill the house. And P.S… I really like the old facade -it really needs to be restored to it’s art-deco appearance.

The April 24, 1937, issue of The Film Daily said that Harry Schiller’s new Grand Theatre would open on May 5. The 800-seat house was the first new theater built in Nebraska in two years.

The Historic Grand Theatre is a 487 seat movie house that was opened in the configuration it is today in May of 1937. The Grand is now a fully volunteer run theatre for the community by the community. Take a look. http://grandmovietheatre.com/

Also take a look at this clip that was done by Nebraska Stories for NET. http://www.netnebraska.org/interactive-multimedia/culture/nebraska-stories-keeping-grand-grand-episode-505

We actually received a tour of the renovated theater in September 2017. Happened to run into the prime mover of the effort to save her. The rehab is stunning, to say the least. They had Mohawk weave the carpet to the original designs. The place is nearly perfect in every detail only updated where it was required like ADA restrooms and digital projection.

If you get the chance to go in, do so. The non-profit runs the place with volunteers and shows movies. The interior is perfect. This has to be one of the best old American cinemas left. See if you can, they have a lot to be proud of in the city’s labor of love. If they could use original details and parts, they did. They did not scrimp or cheap out on any aspect of the restoration. Utterly amazing dedication.

ps as told to us, Wally Kemp operated the place. They have restored his basement office to near original right down to the furniture.