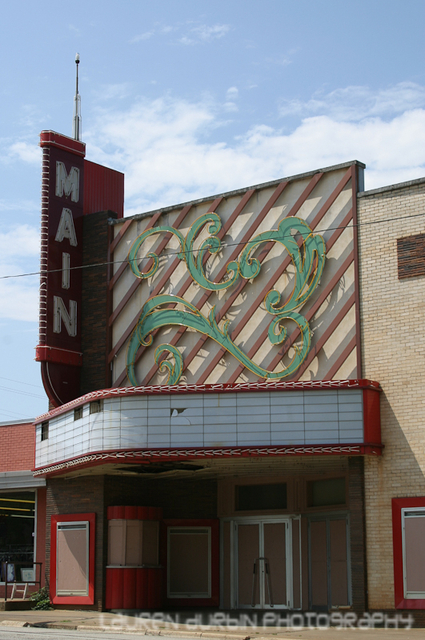 The Main Theater in Nacogdoches has a beautiful exterior that is in excellent condition. The inside, however, is apparantly a different story. According to a neighboring business, the roof and the floor are damaged and she doubts the building owner has any plans of reopening. By 2018 it had been converted into housing.

any for sale listing on this building?

Here is another photo:
http://tinyurl.com/2q85vw

Does anyone know the history behind the Main Theatre? I’m not finding much on the internet.

Boxoffice of February 24, 1951, ran an item about the grand opening of the Main Theatre. The date of the event was not mentioned, but it had apparently taken place earlier that month. The item gave the seating capacity of the Main as 1,100, adding that it was the largest movie house in the area.

An April 8, 1950, Boxoffice item had given the name of the architect of the Main Theatre as L. C. Kyburz. It’s likely that Kyburz designed a number of other theaters. He was a long-time stockholder in the Jefferson Amusement Company, and sat on its board of directors. The J. Evan Miller collection of Cinemrama Theatre plans also attributes the Windsor Cinerama Theatre in Houston to Kyburz.

A July 11, 1953, Boxoffice item about the closing of the Texan Theatre in Nacogodoches said that a Nacogdoches house called the Stone Fort Theatre had been closed when the Main opened, but was still fully equipped. The Main, the Stone Fort, and the Texan were all operated by East Texas Theatres. In the 1930s there had also been a theater called the Rita at Nacogdoches.

It won’t be torn down. Daily Sentinel is subscription only, so I don’t know any details, such as will the neon sign and fleur-de-lis be left alone. I assume they will be.

The building is currently used as an apartment complex. Function should be housing.