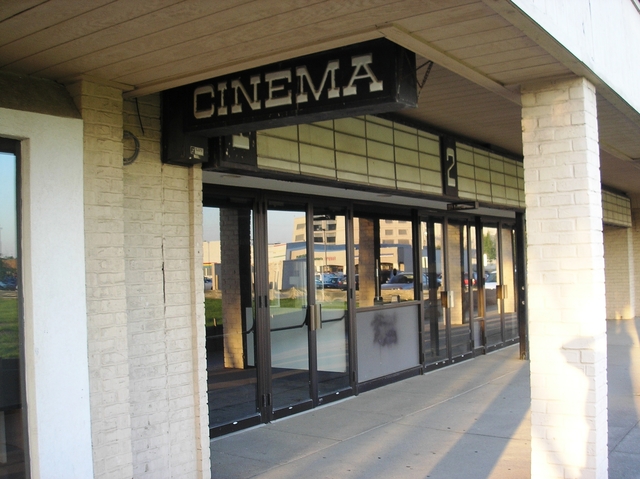 One of the first crop of General Cinema theatres that sprouted throughout the Metro Atlanta area during the early-1970’s. This generation of GC theatres was very basic, with uncomfortable seating and small screens. The Akers Mill Cinema was opened August 5, 1977. This entire breed was demolished, with the exception of the Akers Mill, by 1980.

The Akers Mill Cinema stood pretty much as it did when it closed in 1997, with the distinctive GC logos and decor still intact. It was demolished in 2008.

Want to say a word or two about the comment of basic and the chairs, these were the first line of shopping center theaters the chairs at the time were state of the art, push back seats no seat in front of the other, and the screens were not small they were large only after time when a theater was spit into a twin from a single did the screens get mall, G.C.C was the pioneer in shopping center theaters best of it’s day, the problem like all they stuck to it and did not look to the future, I started with them near the begging in Framingham Ma. in 1959 this became my career, and a good one at that.

Dennis: Thank you for your comments. You know a lot more about GCC than I do since they only came to Atlanta in 1973 and I did not work for them until 1977. I can only speak for the Atlanta area, but we started getting shopping center theaters here in 1963 or so and those theaters had very large screens and much nicer seating, usually rockers, but even the stationary ones were better than those two position seats that GCC was still installing in 1978. I always thought that those two position seats were uncomfortable since the straight up position was too upright and the reclined position tended to make you feel like you were sliding forward. Maybe you had to be just the right size for them to feel right. Never the less, I never met a GCC manager or floor staff that did not hate the things since they all had to be pushed back upright during between show clean up.

As for the screens, I have worked in many theaters with shoebox auditoriums and small screens that were the result of twinning. However, as I said in my comment of 10/17/2005 (hard to believe that I have been writing on this site for over 10 years), Akers, as well as Southlake and Northlake, were built in this shoebox style by design and the poor presentation could not be blamed on twinning. By 1984 when the Gwinnett Place 6 was built they were beginning to make some improvements in auditorium shape and screen size and by 1986 with the Merchants Walk and Parkside 8’s they were finally building nicely designed theaters although there were still limiting their Dolby installations to two to four screens per location.

As I have said before on other GCC theater pages, I appreciated the presence of GCC in Atlanta as I made a good living working for them for a good many years. However, the first generation locations of Perimeter Mall, Northlake, Southlake, and Akers, had as poor a presentation as any theater I ever worked in. In Atlanta at least, those early locations were in very high profile places but by the time they were building the better quality theaters they were placing them either behind or on the back end of shopping centers or hard to find access roads.

All that said, the quality of the presentation never seemed to bother the public as they flocked to these shiny new GCC theaters for a good 15 years before the newer designs made them obsolete.

By the way, the DM’s in Atlanta in my time were Larry Anderson, Larry Pittman, Dave Pollard, and Jeff Lynn. Did you know any of them?

Mr. Crisp was my manager and Mr. Bailey was the assistant. The concession stand was around the column in the picture and the four theatres off to the sides two on each. Upstairs were the bathrooms and offices and the infamous popcorn room. The projectionist was Union and we never saw him.

You must have worked there before 1986 since that is when they removed that island concession stand, put the new one against the wall and surrounded that mirrored post with game machines. I started working the booth in 1985, so if we were there at the same time then I accept the compliment. The projectionist belonged in the booth, not downstairs socializing.

As for Steve Crisp, he was a good manager and friend. I first met him in 1972 when he was managing the Capri in Buckhead (Buckhead Theater on this site) which was the flagship of the Weis operation here. In the late 70’s when Weis sold out and left town Steve followed me as manager of the Loews 12 Oaks. Loews left town a couple of years later and Steve moved over to Akers and GCC replacing Larry Anderson as manager. Larry, who had moved over from Perimeter Mall to open Akers became a DM. Steve left Akers in 1986 to open the new Merchants Walk 8. In 1995, against his better judgement, he was talked into moving to Parkside which had opened in 1987 and had failed to find a manager who could get the job done. The fact that the southeast division office was located upstairs at Parkside did not help.

By the end of the decade the theater business had changed a lot from what it was when Steve and I started. I finally left Parkside, where I was the projectionist, in 1999. I lost track of Steve when he left a few months later and moved to Ashville NC. I regret to say that Steve died of a heart attack a couple of years ago.

Steve was a good friend and a good man to work for. He had the ability to be even tempered even in the most stressful or aggravating times, and was good at balancing the duties of management while making his theater an enjoyable place to work without having the staff running wild.

Yes, early 80’s summer of Flashdance, World According to Garp, and AC/DC movie.Larry hired me and let me lie about my age because I was too young. Crisp fired me because I could not work on Sundays because of school night so no love lost. Then went to work at Plitt Promenade with Mr. Mitcham and had the time of my life. I got to be the projectionist since they only had to keep one Union man for the area and he never came by so I ran them all as a teenager.

I just remember the Akers as being claustrophobic and crowded. Funny how that stuck with me. The last thing I saw there was a revival of Yellow Submarine in the late 1980s. We used to go there a lot on date nights in the early 80’s. I can’t imagine driving to as many theaters all over the city now as we did at that time. I lived in Dunwoody, but we drove all over the city to see films. I miss those days.

Akers Mill had a very strange configuration with the bathrooms upstairs. Everybody was always asking where they were. They also did not keep toilet paper but some sort of small napkins to do yer wipin'. Plus the popcorn was never popped fresh but kept for days, I know I got popcorn duty often. The walls were metallic so acoustics were god awful. The concession stand being right in the middle in front of the entrance blocked the flow of traffic so crowd control was tough.

This opened on August 5th, 1977. Grand opening ad in the photo section.

On November 13, 1998, I attended the opening of the GCC Parkway Point 15, right next door to Akers Mill. That was the last night of operation for this theater. At the opening I ran into the final manager of Akers, someone I had worked with at several GCC locations over the years. She invited me to come by the next day and take some pictures while she snd the staff were packing things up. I have posted ten of these in the photo section. Several are from the booth where I worked often from about 1985-95 and regularly for the years of 1986-87.