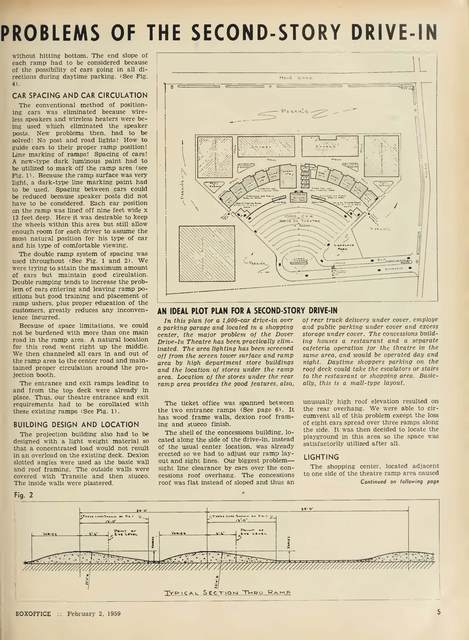 The Dover Drive-In was opened September 12, 1958. It was located on the top deck of a downtown parking lot. It was operated by the Walter Reade Theatres chain.

There was a parking deck on the ‘new’ shopping district, built in the 50’s, in Downtown Dover. Reade’s Dover Drive-In was located on the roof of the deck. The deck has been demolished, although some of the strip center remains.

Is this the only drive-in ever constructed on the top of a parking garage? I have never heard of this before.

When the Dover Drive-In Movie Theater opened for the first time on September 12, 1958 it was said to be the first ever to be built above the ground level in the middle of a downtown city and the first ever to introduce a wireless speaker system. Walter Reed Jr., president of the Walter Reede Theaters Circuit and owners and operators of the Dover Drive-In, made the announcement to the news media on September 8.

The new speaker system incorporated the use of a wireless induction system that eliminated the need for the conventional speaker posts and any direct wire connections for the transmission of sound to the automobiles.. Designed specifically for the Dover Drive-In, the speaker known as WKSP, was a transistor powered, hi fidelity, self-contained unit that could be placed anywhere in the automobile or even carried to the snack stand for refreshments. The speakers were issued to all cars entering the theater and collected upon leaving.

In order to operate the theater all year long, portable, individual gas heaters were issued to each car during the colder months. The mammoth theater screen was constructed off of the parking deck and towered more than 80 feet in the air and more than 100 feet wide. It was capable of showing wide-screen projection.

There was also a fully equipped childrenâ€™s playground with childrenâ€™s cartoon shows every Friday evening prior to the regular program. The modern restaurant was available for movie goers as well as for shoppers during the day. There were more than 200 comfortable seats at the restaurant area for those wishing to view the screen from that location.

The ribbon cutting ceremonies began at 8:00 pm on Friday, September 12, 1958. Theater manager Charles Sutton termed the Saturday night event â€œa very successful opening.â€ About 490 cars filled the 550 spaces available for the grand opening event. Acting Mayor Robert Woodhull cut the red ribbon and offered his congratulations to Walter Reede, Jr.. In a brief speech, Mr. Reede thanked everyone who made their theater possible. Manager Sutton briefly went over the instructions with the audience on how to use the new speakers and the way to enter and leave the theater. The feature movies for the event were â€œThe Hungersâ€ with Robert Mitchum and â€œKathy-Oâ€ with Patty McCormack. The opening was attended by Town officials, local business owners and people associated with the theater trade who all attended a reception at the Dutton Hotel at 9 pm.

Then the problems began. First, the movies were delayed from starting on time because of problems with the speaker system. Apparently, much of the signal for the sound was being absorbed by the steel supports and became very weak. Adding more power to the amplification of the signal resolved that problem, but a much bigger problem hung over the outdoor theater, which would ultimately lead to its demise. The picture on the screen was faded. A red tint glared onto the face of the screen coming from the glow of the nearby neon signs that hung on the sides of the buildings of the nearby shopping center. Manager Sutton stated in the papers that the situation would be corrected. He said that arrangements were being made to shut off the signs or dim them during the coarse of the movie theaterâ€™s nightly operation. However, the store owners would not budge one inch. They maintained that the signs needed to remain lite for it was a major source of their advertising efforts to bring public attention to the place of business. As the word got out of the poor quality of projection on the screen, business began to suffer for lack of attendance and the outdoor drive-in theater came to an end after a couple of years.

a sad story,but the fate of a lot of Drive-ins once built in rural ares.

As a child, I remember being in the parking lot behind the stores on Bassett Highway and asking my father why there was a movie screen over there. He said that the lot was used by day to provide parking for the nearby strip of stores (on Bassett Highway) and was used by night as a drive-in. I remember seeing an elevated parking lot to the east, and the screen was to the west. The screen remained there many years, and was somewhat visible from nearby route 46. Bassett Highway is a short dead-end city road that runs one block parellel with the main drag, which is Blackwell Street. Take a look at an aerial view of Dover on Google maps, and you will see the lot north of Bassett Highway. Please note that the red arrow on the Google map shown here on this overview page is not pointing to the correct place.

At least Walter Reade ran better run theaters such as the now gone Ziegfeld theater which is now a ballroom.

If I’m looking at the succession of aerials right, and the current Google maps overhead, the footers for the screen are still there.