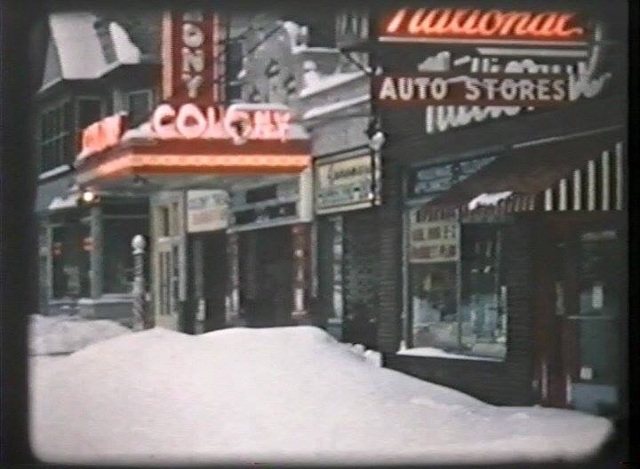 The Colony Theater was located on State Street near Elder Street and opened in 1927. The Colony Theater, which last operated as an adult theatre known as the Colony Art Theatre from 1971, and closed in the mid-1980’s.

Today, the former auditorium of the Colony Theater is used as an auto repair shop. Around 1990, after an arson fire, the former lobby area, including storefronts and apartments, was destroyed and was razed.

The Colony was in the process of restoration after it closed in 1985 or 1986 as an ‘adult’ theatre. The place was about to re-open showing classic films, when an arsonist torched the lobby building, which contained 2 storefronts and several apartments. That was around 1990. The lobby building was demolished—the auditorium was spared fire damage due to fire doors and the ‘iron curtain’ booth windows. It was converted into an auto body and repair shop afterward, which it remains.

The Colony was screening adult films as late as 1976. Here are some ads:
http://plantweed.blogspot.com/search?q=colony

Charles McBee, 48, and his wife, Mary, 48, of Latham, who operate the Colony Theater in Schenectady, pleaded innocent in Police Court in that city Wednesday to charges of disseminating indecent material to minors. Their cases were adjourned to July 31 and the couple, represented by Atty. Kenneth Hay of Utica, were freed in $200 bail each.

They are charged with allowing two girls, ages 12 and 13, to enter the theater and view a film in connection with which, in its advertisements, the theater had stated that “no one under 18 years will be admitted.”

Here is a photo of the Colony’s entrance building after it was damaged by the fire that led to its demolition.

I must have just missed the Arsonist leaving this building. I was walking home from work down Robinson St. when I heard loud crackling noise coming from the building. I ran across the street to, I think it was called the Dog House. I called the Fire Dept and the dispatcher Guy was a real ass.

I remember he insisted several times that I go up to the burning Building because he said he needed an actual street number. I told him the building is on FIRE. I also said, “you can’t miss the fire, just drive down State street near Aumillers drug store”

Quite a while goes by and finally 1 (ONE) small Fire Truck shows up!! The building could have been saved in my opinion if not for that dispatcher that night. I got the feeling that he just didn’t believe me. I hope that guy got fired, but I doubt it…after all, this is Schenectady NY I’m talking about.

When I was young, Friends and I would buy smoke bombs and other novelty fireworks (not real fireworks) from State News. That was a really cool store with a great selection of 10 cent candy. Sadly, stores like that don’t exist anymore.