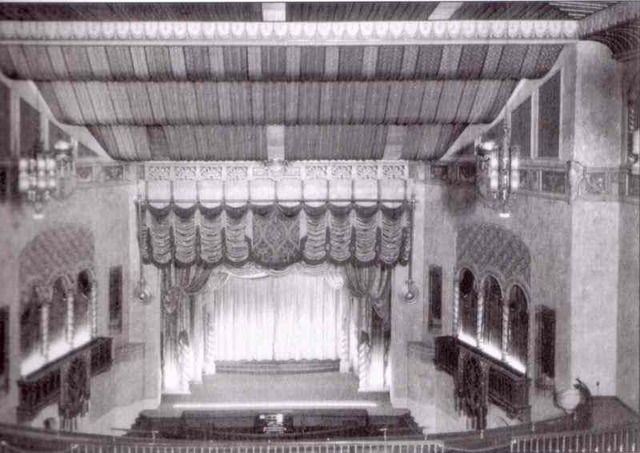 There were two American Theatre’s listed as operating in Roanoke, VA in the 1914-1915 edition of American Motion Picture Directory. This American Theater was built in 1928. Closed and demolished in 1973 for a new First National Exchange Bank.

This was a great theater. Large balcony, upstairs concession stand. Reminded me of a bigger, grander version of the Byrd Theatre in Richmond. Close to the Carpenter Center in granduer. Was the longtime home of the Miss Virginia pageant. Henry B. Boynton also had a hand in design and construction. Their firm of Smithey and Boynton designed and built many famous buildings in the valley, such as the Shenendoah Life Building. They also built the Lyric Theatre in Blacksburg and the Salem Theatre, Salem. Boynton out lived his creation, dying in 1991 at age 92. Saw movies here in 1960’s, last one in 1972 probably. Highlights were “The Graduate” and “Little Big Man”.

Just spent an hour going through over a hundred pages of the old roanoke website.On it are pics of the MUSIC ACADEMY,which is fairly well remembered-and should be on this site- quite beautiful,but also the RIALTO(Campbell Ave.)and the PARK,nearby,probably on Jefferson.

The architect’s middle name is spelled with a double “p” in his entries in various editions of the AIA’s American Architects Directory: Phillippe. As the content for the biographical material in the directories was submitted by the architects themselves, this spelling is most likely correct.

I remember the Park theater. We visted Roanoke in early 1960s & it was already closed. It had a stand alone ticket booth I believe.

I worked at the American Theater in the 1960’s. The Park Theater was on Jefferson St between Luck & Franklin Road on the west side of street. It did not have a stand alone ticket booth but the American did. Also we claimed the American seated 2,000 rather than 1800 but it was actually about 1997 or so as the balcony was a little shy of 1,000 seats but the downstairs was! Next door and heated and cooled by the American system was The Roanoke Theater which seated 1265 with box seats & balcony and about 150 more in the second level balcony which was closed in 1960 as it was for African American patrons. Yep that was nuts but that is the way it was then:–( The Roanoke was build in 1911 for stage shows only and movies were added later. It actually had a larger stage and more wing space than The American.

When I was a teen and working in Roanoke theaters, there were five! The American, The Roanoke, The Jefferson, The Rialto and The Park. Also there were neighborhood theaters the Grandin on Grandin Ave and The Lee on Williamson Rd. The Academy of Music operated until the late 40’s on Salem Ave. downtown but was for stage productions only. Also years before my time in the teen’s & 20’s Roanoke had the Lyric, The Bijou, The Isis, The Princess, The Virginian, The Comet, The Electric Parlor, The Wonderland, The Azusu & maybe a few others. These were small houses with no stage or balcony & the silent films were 5 cents. The Virginia and The Boston were theaters for African Americans back in that day.

The modern address of the American Theatre’s site is 215 S. Jefferson. Roanoke converted its street numbering system sometime after the theater was built. Street View is set to the wrong block. The American Theatre was in the next block south, on the northwest corner of Jefferson and Kirk Avenue.

In the interior photo currently displayed, the style of the auditorium looks Moorish/Oriental rather than Renaissance Revival. The facade in the exterior photo looks like a standard commercial block of the period, with a few Art Deco touches and a Moorish arcade on the top floor.

Joe Vogel. That picture above of the American is from the 1928 grand opening. I’m rather sure of that. The screen is not there. The camera was about half way up the long sweeping balcony which seated almost 1,000 people with the main floor seating 1,000. We use to claim the theater seated 2,000 but it as just a few seats short of that and it was in the balcony where it was about 996 or so seats. It also looks as if the lights that shined down on the three steps of curtains that ran down to the top of the stage were off. They were in the attic. Toward the camera was a large square section in the ceiling that had large white lights in each corner & smaller lights running from one side to the other on all four sides. All of the lights I’m discussing now were not on during the movie:–) Running next to the ceiling from the front of the balcony all the way to the back of the house to the projection room on both side was a long row of inset lights that looked like the footlights on the stage. There was a yellow one, then a blue one and a red one and the process repeated itself until it reached the end many lights later. Each color was on individual switches on the big switch board back stage which was on the Krik Ave side of the stage. If the switch was in the middle position, it was OFF. If it was down it was ON. But if it was UP, it would come on when the operator up in the projection room would press a master button up there. Every switch for the house lights and stage lights that was in the UP position would come on or go off when the projection room operator would hit that button between movie showing.

BTW. In the picture above, the entrance you see at the bottom on the main floor on the right led back stage and the one on your left went up steps and then there was an exit door that led to Kirk Avenue which was on the south side of the theater building.

In 1940 the marquee of the American was updated with neon that flashed. It had neon shooting stars that were blue and their tails flashed in sequence in red neon. Lightening strikes flashed in red neon on the sides and the word AMERICAN would flash red then green then red and green together and then start over. At the bottom were running border lights which were just standard 25 watt light bulbs.

At the same time Mr. Hines had the marquees at The Roanoke, The Park and The Rialto updated with action neon. Roy C. Kinsey sign company did it. The same people who put the star on Mill Mountain in 1949.

I just posted an Oct. 2, 1913 ad stating the Opening of the American Theatre

The American Theatre that opened in 1913 was probably completely demolished to make way for the house that was built in 1928. The new American Theatre had a frontage about twice that of the original house, so it’s very unlikely that any of the old building was incorporated into the new one.