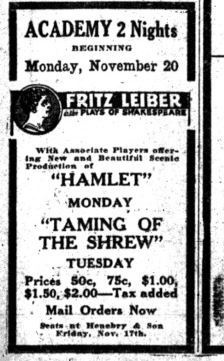 Built in 1892 as an ornate opera house patterned after the famed La Scala in Italy. “Ben-Hur” was screened there circa 1905. Also used as a vaudeville and burlesque house. It met the wrecking ball in 1953. See photo at
http://tinyurl.com/82p8ufo

The Academy of Music in Roanoke is listed in the Virginia section of the 1897-98 edition of the Julius Cahn Official Theatrical Guide. J.L. Hooper was Mgr. Admission prices 25 cents to $1. The theater was on the ground floor and had both gas and electric lighting. There were 6 in the house orchestra. The proscenium opening was 36 feet wide, and the stage was 48 feet deep. There were 2 newspapers and 4 hotels for show folk. The 1897 population of Roanoke was 25,000.

The Academy of Music was in the 400 block of west Salem Ave about half way between 4th street and 5th street. Lots of stage productions there and often starring actors of note. I have a bill where Boris Karloff was staring in a play. The inside of the theater was very nice but had more of an auditorium feel than a theater to me. Two theaters in Roanoke, Va were larger. The American (1928-1971)(2,000 seats) and The Roanoke (1911-1961) (about 1400 seats including a second balcony for African Americans) which was next door to The American on Kirk Ave but it’s entrance was around the corner on Campbell Ave except the upper balcony had an entrance with small box office and marquee on Kirk Ave for African American patrons. I know that sounds nuts today but that was the way it was then and I knew back then as a teenager working there that it was not right and was glad when my black friends could walk right in the main entrance starting about 1963 or 64.

The Roanoke for it’s first years was on the Keith circuit which fed a steady diet of stage presentations. The Roanoke’s stage was wider than The Academy of Music but not as deep. Probably about 25 to 30 feet deep with dressing rooms up stairs on the side of the stage but high enough for wing space on the stage and additional dressing rooms under the stage.