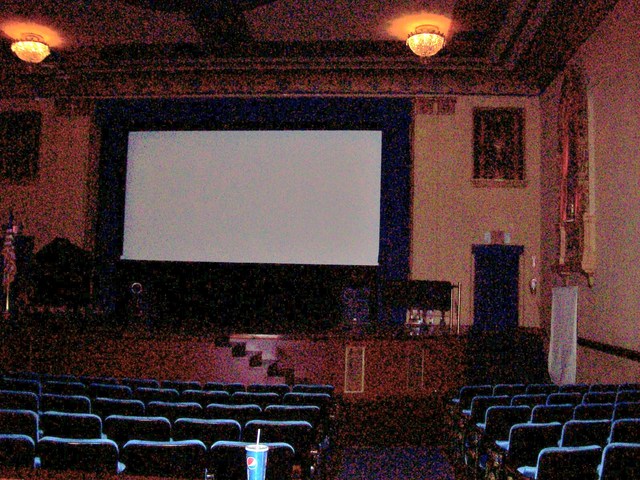 The Raymond Theatre opened on October 11, 1928. As its name implies, is owned by the City of Raymond.

During a renovation in 1996, the theater completely replaced its sound and projection equipment, including the addition of DTS Digital sound, a new screen, and surround speakers. Full handicap access was also added.

Additionally, since the photo at right was taken, the City has installed a replicated vertical sign above the right-hand poster case on the theater’s exterior.

Today the Raymond Theatre hosts a mix of silent and first-run films, as well as live performances.

The original organ is still in use.
History & photos here:
View link

The Film Daily Yearbook, 1950 edition gives a seating capacity of the Raymond Theatre as 554.

Nice little theater that’s well worth a visit. People will like it’s charm. :)

However, I can find no follow-ups.

Here’s an old photo showing A.G. Basil’s Raymond Theatre. A couple of early streamlined cars indicate a date no earlier than the mid-1930s. In fact, I think the car just this side of the street lamp is a Ford Coupe from 1935, the first year Ford streamlined its cars.

Digital projection was installed in June, 2013. First-run films are currently being shown on weekends.