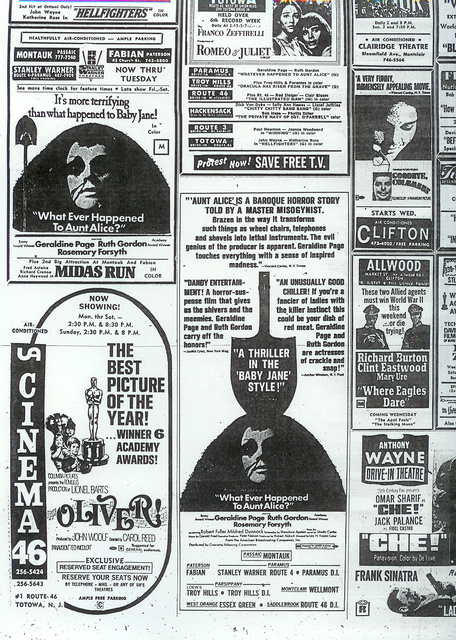 The Cinema 46 opened by Skouras Theatres August 12, 1964 with The Beatles in “A Hard Days Night”. It was expanded to three screens in September 1976. It closed on April 27, 1997 with Mark Hamill in “Star Wars:Episode V - The Empire Strikes Back”. It was last operated under United Artists after Sony expanded a theater to 14 screens nearby on Route 46. It had 70mm projection capabilities.

I saw a lot of moves at Cinema 46. I wish I could remember more of them. When I was twelve an usher there caught me and my buddy trying to sneak into an R rated movie. I saw “Purple Rain” there and liked it so much I stuck around and saw it again. Sometimes if it was crowded the ushers asked people to exit through the outside doors. But if you told them you needed to make a phone call or use the bathroom they let you back in the lobby and you could usually stick around and see another movie. Does anyone remember pay phones?

I managed this theatre from 1965 to 1966. Theatre opened slowly but took-off after showing “Zorba The Greek”. we ran an “arty” type schedule including; “Fail Safe”,“A Man For All Seasons”, “The Ipcress File.” The theatre never had enough parking in those days resulting in gridlock for the second evening showing. The NJ State Police actually blocked off our entrance because of a traffic back up on Route 46.

Kirk Douglas appeared here in person for the Reserved Seat Engagement of “Cast A Giant Shadow.” I did not get to meet him as I had moved on to another theatre.

Was that theater the Wayne quad? Both theaters were run by UA in addition to the Pascack theater in Westwood, NJ among others, before either closing them or selling them to other chains as competitors expanded screens such as Sony/Loews in Wayne.

I saw Star Wars the first week it arrived at the Totowa cinema. We got there too late for a good seat. I was in the first row and the farthest seat to the left. With the curved screen I could only see the right side of the screen. It was the only seat left but hyperspace was still a great experience. It was fun to turn to the right and look back at all the attendees faces.

I enjoyed this theatre and I saw many movies here. I loved the seats and the big screen. I miss this theatre.

Correction: The Cinema 46 opened by Skouras Theatres on August 12,1964 with The Beatles in “A Hard Day’s Night” It closed in April of 1997 under United Artists Theatres.

When did UA take over…had this theater still run it would’ve been owned by Regal. The opening of the Paramus Park movie theater this fall will mark Regal’s return to northeast NJ after selling its theaters in North Bergen to independent companies. The closest Regal is in South Plainfield as well as Pohatcong, NJ.

When were the second and third screens built?