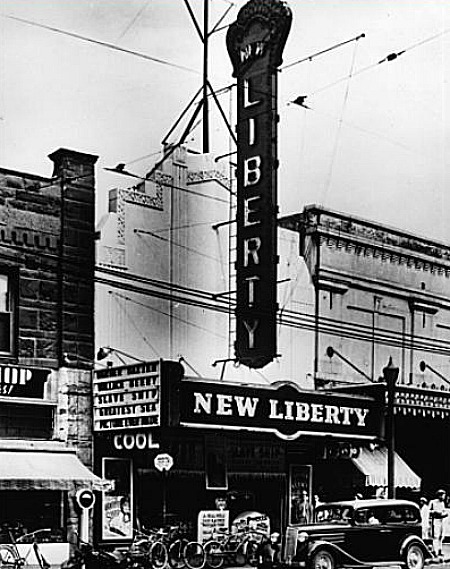 The Ritz Theatre was opened on September 7, 1924 as a legitimate theatre. In January 1926 it went over to vaudeville and was renamed Pantages Theatre. This was not a great success and it closed in 1928. It became the Civic Repertory Theatre, which only lasted for nine weeks. It then briefly operated as the Plaza Theatre.

In 1930 it reopened as a movie theatre, named New Liberty Theatre it was closed in 1948. Later reopened it finally closed in 1956. It was demolished to make way for the Tarrant County Convention Center.

Jan Jones' book Renegades, Showmen & Angels: A Theatrical History of Fort Worth from 1873-2001 gives a timeline for the New Liberty Theatre. It opened on September 7, 1924, as the Ritz Theatre, a legitimate house. In January, 1926, the house converted to vaudeville as the Pantages Theatre. The vaudeville programming was not a great success, and until 1928 the Pantages circuit offered varied programs of movies, road shows, and performances by the circuit’s own stock company, the Pantages Players, until finally giving up the lease.

In 1928, the house became the Civic Repertory Theatre, a venture which lasted only nine weeks. November, 1929, brought another repertory company to the house, and it operated briefly as the Plaza Theatre. Finally, in 1930, the house was sold to Leon Lewis, who renamed it the New Liberty and operated it as a movie house until 1948.

The New Liberty theatre was on the southeast corner of 10th and Main Streets, across the street from the second Majestic Theatre. Google Maps will not be able to find this location as the entire intersection, along with several others downtown, was obliterated when the city’s convention center was built.

I have to clarify my previous comment as to the location of the New Liberty. The entrance of the theater was on Main Street, but the building ran through the block and the auditorium section was actually on Commerce Street, across from the Majestic Theatre. The Hippodrome Theatre was across Main Street from the New Liberty.

Architect was Wiley Gulick Clarkson of Fort Worth