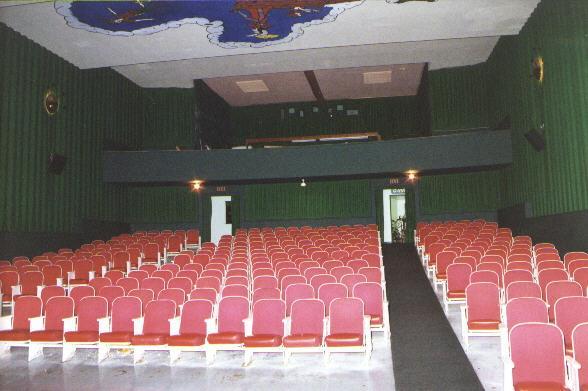 The Chehalis Theatre was originally constructed in the late-1920’s as a car dealership and was not a movie theatre until its conversion in 1938 to the Pix Theatre.

In 1958, the theatre was renovated and renamed the Chehalis Theatre. Tom Moyer Luxury Theaters bought it in 1980 and closed it in 1984. It was converted into a videotape rental store that same year and operated until 1994, when the video store finally folded.

The Chehalis Theatre sat empty and neglected for two years until local theatre buff Daryl Lund purchased the theatre and restored it to its full glory. Original Art Deco light fixtures were found in the attic, restored, and re-installed in the auditorium. Brand new seats, a new snack bar, new projector, new lamphouse, and digital sound were added. The marquee was repainted and many sections of neon were repaired or replaced.

The Chehalis Theatre closed in December 2008, two months after a ten-screen multiplex opened outside of town. It was reopened in late-2016 offering live performances and classic movies.

The theater has closed.

CHEHALIS, WA — Two months after the 10-screen Midway Cinemas opened outside of town, the single-screen Chehalis Theater was forced to close last month due to poor business and its inability to obtain new films.

“I didn’t have any movies to show, because the new theater took them all,” said the owner. The city’s mayor noted “It’ll leave a big hole in the downtown.”

The current owner purchased the building in 1994 and leased it out as a video store. In 1997, the video store owner converted it back into a theater and operated it for a year before closing in 1998. The landlord then re-opened the theater and kept it operating until last December.

He said that movie company restrictions limited what he could do with the theater.

“You can’t do dollar nights and family nights. The movie companies say you have to charge this much and be open this long.”

The owner said he refuses to sell the theater and is looking at trying to tap a niche market, perhaps by offering English movies dubbed into Spanish for the Latino community.

“Who knows, I might start showing X-rated movies,” he joked.

It could be a nice theatre to show art and foriegn films. Usually these single screeners do well that way.

The Chehalis Theater is set to reopen in May 2009 as a second run theater.

The theater is still closed.

Theater is still closed, but does have a video projector installed in addition to the original 35mm film equipment.

Are there any plans to reopen? And do you mean a digital video projector?

The theater has been sold and the new owners plan to re-open this theater sometime in August 2016. The Centralia Chronicle has a story about this:

This Theatre is OPEN and has some fantastic things going on! Owner and staff are very friendly and gave me a tour. It’s worth the drive to come and check them out. Let’s change status to “OPEN”

What was that painting on the ceiling of the auditorium? It looked like Tom and Jerry (and maybe Little Lulu?).