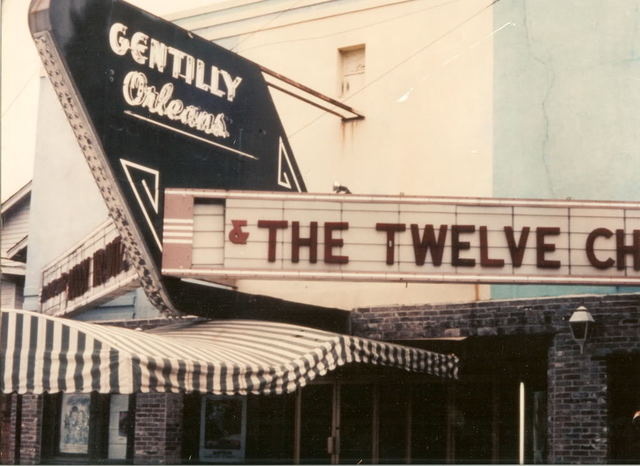 Here’s an ad from 1963 when this theatre was called the Gentilly Art:
View link

I went to the Gentilly when it was the Gentilly Orleans in the 1960s and 1970s. I remember seeing “The Hot Rock” there with Robert Redford. What stood out to me as a teenager was that it had a restaurant attached where folks could by beer and then come in and watch a movie. They also would show previews not approved by the MPAA.

Happy memories from those days,

I worked at this theatre beginning in 1974, when it was known as the Gentilly Orleans. The Groove Tube was showing at the time.
The Gentilly Orleans was a cozy little art house, showing some of the better and more offbeat art fare of the day. The auditorium was filled with high back blue rocking chair seats, and had a nice size screen.
There was a long closed balcony, where there were still a few rows of wooden seats covered with many years of dust.
Attached to the theatre was a restaurant, known for years as the Skillet, sort of a local greasy spoon. While I was working there, the restaurant was remodeled and the name changed to the Distillery, featuring a wide assortment of foreign beers, and really great bar-b-que. The theatre and restaurant shared the same rest rooms, and were attached by a very narrow hallway. Theatre patrons were permitted to go to the restaurant and purchase beer, and bring it back into the theatre.
The lobby had comfy couches and really had a living room feel to it. The lobby and concession were small, as you will see in photo links below. The theatre also offered complementary coffee to patrons.
The owner and manager of the theatre was Joe Bethea. This was, of course, toward the end of the era of the mom & pop theatre, where you were greeted by the owner of the theatre personally as you entered. Only one theatre still offers that personal touch in New Orleans today, The Prytania.
I remember Mr. Bethea telling me that in 1966, the theatre showed only 2 movies, A Man and A Woman for 7 months, and Georgie Girl for 6 months.
Some of the movies that played at the Gentilly while I was there were Felliniâ€™s Amarcord, The Night Porter, Flesh Gordon, a double bill of The Apprenticeship of Duddy Kravitz & The Twelve Chairs, Inserts starring Richard Dreyfuss, and Louis Malleâ€™s Lacombe Lucien.
A packed house was a sure bet for the weekly midnight shows on Friday & Saturday. We showed many rock classics at midnight, such as the first Pink Floyd movie, a revival of The Beatles in HELP, and Jimmy Cliff in The Harder They Come.
Some of the more offbeat midnight movies I remember were Pink Flamingos, Andy Warholâ€™s Women in Revolt, The Erotic Adventures of Zorro, and a local made 16MM comedy entitled OK-RAH: The Okrah that Ate New Orleans!
The Gentilly had the New Orleans premiere of The Rocky Horror Picture Show, which showed every weekend at midnight from late 1976 until the theatre burned in 1978.
Some time after the fire, the building was purchased by a local developer, and was remodeled into several different businesses.
I have many happy memories of working at this theatre, and have thoroughly enjoyed this walk down memory lane.
Hereâ€™s a color pic of the front of the theatre from about 1975:
View link
Hereâ€™s a pic of the front of the theatre from a Figaro newspaper. The Skillet is on the far side of the theatre.
View link
Hereâ€™s a pic of the concession stand:
View link
And a pic of the lobby:
View link
This is a pic of the building in 2005 flooded by hurricane Katrina:
View link

I was part of the regular people at this theatre in the late 70’s. This group comsisted of myself- Rick G, Angela G, Godfrey, Danny O, to name a few. ()

Drive-in Mike,i see you played the GROOVE TUBE.We picked it up second run at the theatre i worked,National Hills a family theatre for the most part.Our City Manager saw the first few minutes and stood by the BOx office checking I.D. I did laugh myself silly. AT both the movie and Mr.Tinney.

joysmovies … Do you happen to have any more information about “Ok-rah: The Okrah that Ate New Orleans”? I teach at Xavier University and have a future idea for a performance project that plays with this film. Thanks for any leads!