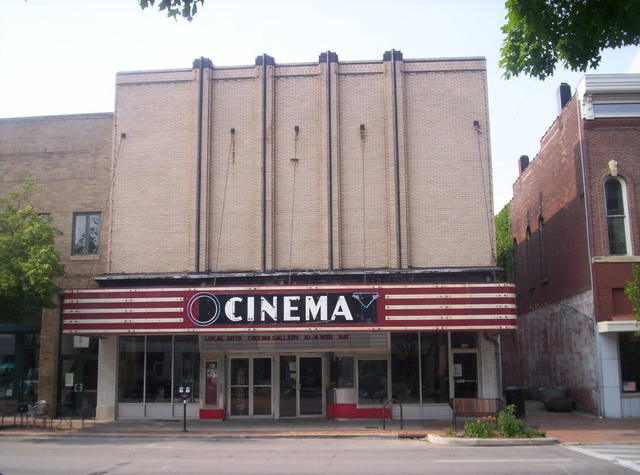 Opened as the Princess Theater in 1915, in what was originally the 1870s Busey’s Hall, an opera house.

The building was completely redesigned in the Beaux-Arts style, complete with mosaic tile floors, maroon colored walls in the auditorium, and Tiffany glass in the lobby. It originally sat over 600, and an Angelus player piano accompanied the photoplays on the screen. There was also a small orchestra pit.

In 1934, the Princess was purchased by the LaSalle, Illinois-based Alger Theaters chain, and was completely remodeled in the Art Deco style, inside and out. Seating was also increased to seat close to 700, and a stage and larger orchestra pit added. A lounge and new restrooms were added, and the lobby was enlarged. The first film to play in the newly reopened Princess was “Belle of the Nineties” with Mae West. In 1949, the same year a concession stand and new marquee were added, Cinemascope came to the Princess with “The Ring of Fear”.

In 1958, Kerasotes took over the Princess and modernized the interior, and added new seating as well. Eight years later, Kerasotes made the Princess a second-run house, and it was renamed the Cinema Theater.

In 1994, the theater closed, no longer able to remain in business showing films that were already available on video by the time the Cinema screened them. In 1996, the lobby of the Cinema was transformed into the Cinema Cafe, a coffehouse. Since 2001, the former theater has been home to the Cinema Gallery, an art gallery.

Here is a link with additional information:
http://tinyurl.com/fhc4k

kencmcintyre’s link is dead, and I don’t recall what was on it, but it might have been to this page of the City of Urbana’s web site.