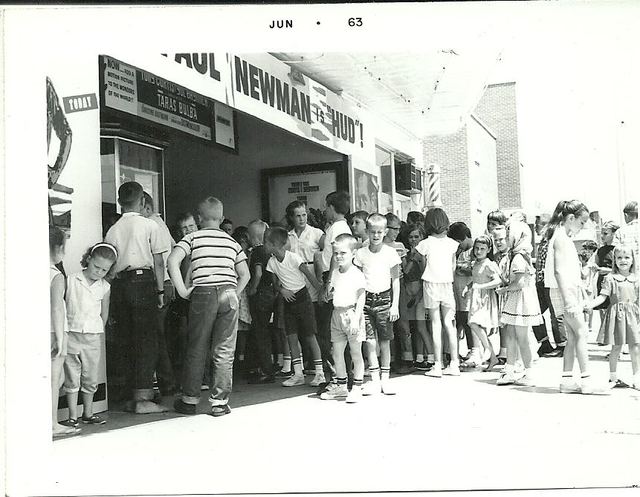 The Allred Theatre is located in downtown Pryor, OK. The first thing you notice is how nice it looks from the outside as you’re passing by. From its big triangle-shaped marquee reading “Allred” on both sides to its tiled ticket booth to its blinking light bulbs, you can’t miss it. It dominates the street. However, as you enter you’ll soon notice how altered the theatre is. Built in 1914 with 235 seats, it was given an Art Deco style makeover in 1934 with an increased seating capacity. On April 27, 1942 the theatre was virtually destoyed by a tornado. It reopened in 1942 as a 400-seat theatre.

Today the Allred Theatre looks completely new. Its main auditorium has been divided into two screens with a third screen shooting off the back of the building. They spared no expense in the renovation, but the atmosphere of the old place has been terribly altered. For the fourth and fifth screens, an annex has been added. The annex is a converted building two buildings away from the Allred Theatre.

In conclusion, the Allred Theatre is a nice ‘new’ theatre with an old facade. It plays first run movies, but don’t expect a classic theatre atmosphere. I really would have liked to see it before its alteration.

The Allred was divided into 2 screens either in the ‘50s or the '60s. The large, building wide screen in the rear of the building was divided into 2 screens around 2001, creating the Allred 3. A few years later, the Annex was opened. It has 2 stadium style screens. 4 of the screens are equipped with DTS. The Allred has 2 concession stands and the Annex has one concession stand.

After years of mismanagement and neglect, the theater was not viable as an operation and was falling apart. After renovation and expansion, it became one of the top independent theaters in the state.

This link has a photo of the Allred Theatre after it was destroyed by a tornado. On below link type “pryor main street after tornado"
View link

This theater has been closed since the middle of August, 2012, but a student is leading the charge to update its technology and get the theater reopened. View article

This reopened with three cinemas in 2013.

Website showtimes indicate that films are playing on 5 screens with similar starting times.

The Lyric Theatre launched as a 235-seat venue in 1914. In 1917, the Allred family became the theater’s third operator. At the end of what appeared to be a 20-year lease, the theatre was closed briefly and given a streamlined makeover with seating expanded relaunching as the Allred in 1935. The theatre was given a new projection system in 1939. The Allred was basically destroyed by an April 27, 1942 tornado. It was rebuilt and relaunched as a 400-seat house in November of 1942.