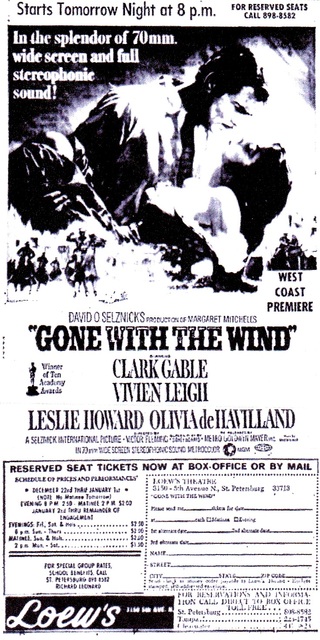 Loew’s was so proud of this new theatre that they featured it in the company’s 1965 annual report. It opened on December 25, 1965 with Sean Connery in “Thunderball”. 1965.

The report has an artist’s rendering of the theatre, captioned “Loew’s new Theatre in the heart of St. Petersburg, Florida, adjoins one of Florida’s largest and most successful shopping center complexes”. In 1972, it was taken over by General Cinema and renamed Fifth Avenue Cinema I & II. It was closed on March 30, 1989.

It now houses the King of Peace MCC Church.

Forgot to mention the alternate name indicated at the page above: Fifth Avenue Cinema. While I’m here, this page has a current exterior photo:

Grand opening with “THUNDERBALL” Great opening Flick. Much better than when Loew’s in Tampa opening a major theatre with the soft-core"CANDY".

S.Porridge,It does look like GCC took over looking at that Road marquee.

Thanks for the info Nick.

I posted the grand opening ad in the photo section for this cinema.

I worked as the projectionist at the FIFTH AVENUE CINEMA for GENERAL CINEMA both when the theatre was a single screen house and as a twin. The projectors were CENTURY with CENTURY sound heads. The projectors were running 6,000 foot reels. When it was made into a twin, both sides were the same with the exception that theatre one now had CENTURY “reverse scan” sound heads with both theatres having KELMAR amps. The arc lamps were ASHCRAFT “ CORE-LITEs. The booth utilized CINAMATION automation with a matrix board and diode pins for programming. The arc lamps would "self-strike” by means of “bullets” places between the positive and negative carbons. These “bullets” would explode when power was applied, thus establishing the arc. We never used them because they tended to blow ash onto the reflectors. I have still photos and video of the booth in operation. I also have one of the CINEMATION automation units ( with diode pins.) GENERAL CINEMA ( a wonderful company to work for ) did it right. This was the only theatre I worked that had four arc lamps and FIVE rectifiers with switches to change rectifiers if one went bad. Now that’s class.

General Cinema was the last operator of this theatre. They acquired it from Loews in 1972 and operated it until 3/30/1989. Was last known as the Fifth Avenue Cinema I-II.