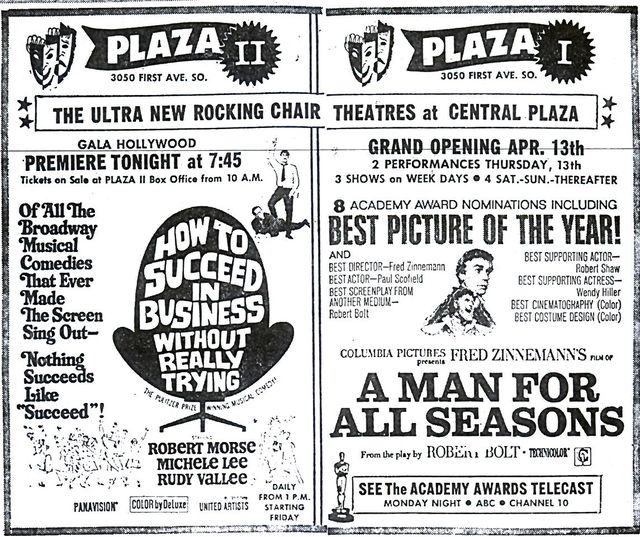 The Plaza I & II was Florida State Theatres first twin in the state. The theatres opened a week apart with the grand opening for Plaza I being held on April 6, 1967 with Robert Morse in “How to Succeed in Business Without Really Trying”. Plaza II followed a week later on April 13th with Paul Scofield in “A Man For All Seasons”.

The theatres were managed by Walter Traymor. P.H. Garland, the Vice President of Florida State Theatre Operations was also on hand for the ribbon cutting ceremony where he cut a strip of 70mm film to officially open the theatres. Music for the evening was provided by Northeast High School Band. The amenities included a large lobby, a giant mirror parlor for the ladies, and the latest advances in projection and stereophonic sound. At least one theatre was equipped for 70mm projection.

Capacity was 1,200 for both theatres combined, with luxurious Massey Deluxe Rocker Lounger seating. Wall-to-wall drapery covered the auditorium walls and curtains opened and closed over the screens. Drapery and curtains were either dark tan or gold as best as I can recall.

I saw at least three films here: “Gone With the Wind”, “Willard” and “Rocky Horror Picture Show”. I believe “Rocky Horror” only ran for a few weekends before it was mysteriously pulled. I also recall “Brainstorm” playing here in 70mm.

In 1978 Plitt Theatres acquired ownership from ABC Florida State Theatres, and in July of 1986 the theatres were sold to Cineplex Odeon. As best as I can determine the Plaza I & II ceased operations at the end of January or in early February of 1989. The final features that played appear to have been “Scrooged” and “My Stepmother is an Alien”.

Sometime towards the late-1990’s I had a chance to visit the building which at the time had been converted to a supply company. The auditoriums had been completely stripped to the bare walls and filled with tall shelving housing various supplies. I was shocked to see the top half of both screens still hanging in place. The bottom half of each screen had been unceremoniously torn out to allow the shelving to expand underneath the screens to the wall were they were bolted. You’d think the new owners would have the courtesy of taking the screens down completely. It was the most awkward sight I’ve ever seen in a closed theatre. I walked right underneath the torn screen which was dangling just above my head. Now that’s sad.

Here is an item about this theater from the August 24, 1966 issue of Motion Picture Exhibitor:

“Construction was slated on St. Petersburg’s first twin, which would occupy over five acres on the southeast edge of Central Plaza. The estimated cost of the Florida State Theatres house is $325,000. Robert Collins is the architect. FST already operates three downtown St. Petersburg theatres—the Florida, State, and Cameo.”