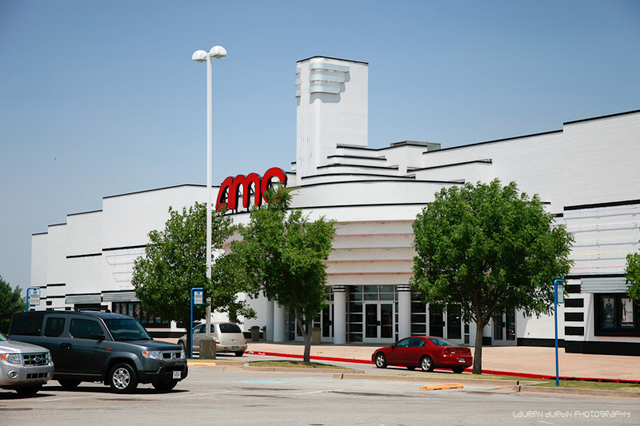 Regal Crossroads 16 was opened on February 26, 1998. The theatre featured stadium seating, surround sound, and more. On September 16, 2006 it became the AMC Crossroads 16. It was renovated in 2017, and renamed AMC Classic Crossroads 16, but the entire mall was closed at the end of 2017. Demolition of the mall came in 2021, but the cinema continues as it is in an outparcel building.

The Crossroads Mall 16 is now operated by AMC Theatres (it was traded to AMC by Regal along with the Fiesta Square 16 in Fayetteville, AK and $34 million dollars for 4 theatres AMC needed to divest as part of their merger with Loews- the E-Walk in NYC, the Meridian 16 in Seattle, the Keystone 16 in Dallas, and the Fenway 13 in Boston).

I went here instead of the Warren this weekend because the Warren was sold out. Although Crossroads is one of the ugliest multiplexes i’ve been to, the presentation was very, very good in the main house when I saw Valentines Day on sunday. Fantastic sound.

Color snapshots of Crossroads Mall Cinema 16 can be viewed on this site,
http://www.roadsideoklahoma.com/node/554

The Regal Crossroads 16 was announced on January 30, 1997 as a 16-screen outparcel megaplex at the 23-year old Crossroads Mall which had opened theatre-less in 1974. General Cinema had launched an eight-screen outparcel multiplex in August of 1988. The Regal plans were for the city’s first stadium-seating megaplex with wall-to-wall screens and digital sound systems in all auditoriums. Not to be outdone, just months later AMC announced a 24-screen facility with stadium seating in Quail Springs followed by Cinemark announcing a 20-screen venue a month after that followed soon after by an announced downtown 16-screen project. The megaplex race was on in OKC and all four projects came to fruition.

The 63,000 square foot Regal project broke ground in August of 1997 and General Cinemas – with its paltry multiplexes adjoining both the AMC and Regal projects simply bolted from the market on August 14, 1997 selling to Hollywood Theatres. Regal’s project lagged just a bit as further adjoining projects were sketched out. The Regal Crossroads 16 launched on February 26, 1998 with its Café del Moro plus regular snack bars with 16 new films. Hollywood Theatres, operating the older, Crossroads 8 saw business drop 70% in a repositioning as a sub-run discount house. Hollywood closed down the multiplex on June 7, 2001 – though it would be reopened in 2002 and pluckily continued to 2015. Cinemark would open its 20-screener in October of 1998, AMC’s 24-screen Quail Springs would sign on in December 1998 and the 16-screen Bricktown entertainment concept was delayed all the way to its opening in 2004.

On September 16, 2006, the Regal theatre became the AMC Crossroads 16. Following the Loews and AMC merger in January of 2006, AMC had to divest a number of properties due to competitional concerns within zones. As noted above, Regal swapped the Crossroads and another 16-screen facility in Fayetteville, Arkansas and cash for two 13-screen facilities (the New York City’s E-Walk in Times Square and Boston’s Fenway 13) and two 16-screeners (the Loews Keystone in North Dallas and Fiesta Square 16 in Fayetteville, Arkansas).

Not long after, the Crossroads Mall went into free-fall collapse reaching greyfield status- a term akin to a “dead mall” - as it struggled to find new retailers after original 30-year lease holders bolted from the aging property. Outparcel retailers also began to exit and the area looked haggard. In 2013, the mall was reconceptualized as Plaza Mayor at the Crossroads - a most appropriate name - as the Mall was at its own crossroad.

There was too much square footage inside to create the Hispanic destination vibe that had worked so well in Fort Worth’s conversion of moribund Seminary Square Mall to the festive La Gran Plaza. Safety began to be a question. Best Buy closed as an outparcel location, Starplex closed up the 8-screen discount moviehouse although it was taken on by an independent to its ulitimate 2015 closure.

Still, AMC gave the Crossroads 16 property a token refresh in 2017 for the 20th Anniversary of the facility – a nice surprise as many predicted the theater would move on at the end of a leasing cycle. That same playbook had been run inside the Plaza Mayor as businesses tanked and businesses broke leases leaving vacancies which would decimate the mall’s viability. In fact, the mall operators told everyone inside the mall to vamos just as the Christmas season was beginning in 2017 sadly ending the concept.

The then-closed Plaza Mayor (except a flea market and an events hall) was not the best calling card for the former destination Crossroads theater. AMC, not surprisingly, “downgraded” the location to the AMC “Classic” Crossroads 16 – the “Classic” was a designation short-hand for an inherited theatre which would not be receiving leather loungers or enhanced snack bar or even updated carpeting anytime (soon) while the months counted toward lease expiry. The former Crossroads Mall / Plaza Mayor was mercifully razed along with the AMC attractor signage in 2021 along with selected vacant and tagged outparcel buildings as the area transitioned from retail mecca to a less certain future.