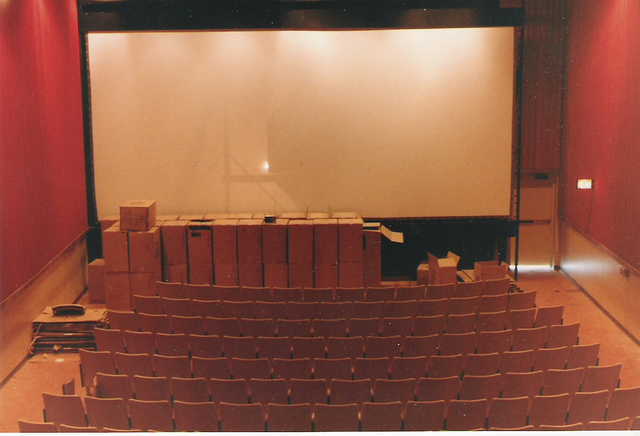 Thanks for the correction Ronnie21 – memory plays tricks when you get older. Another correction – since I wrote that 2009 entry, I now say I met my ex-wife at the theatre.

Visited the former Heritage Plaza 5 on November 12, 2015, and met a couple members of the staff of People’s Church.tv. The church has done an impressive job of rehabilitating the theatre, utilizing four of the original five auditoriums for their weekly services. According to the staff, the church took over the building about three years ago. Two new pictures posted in the photo section.

Chicken Little was the last movie I went and in this theater and then it closed in I think in 2006. One of the greatest memories I have about the Heritage Plaza Cinemas is back in December 1999, when I was 8 years old, my family and I went there Seven o' Clock at night and saw Stuart Little.

KP: Very much enjoyed your memories of this theater. This place and your experiences are the poster children for dozens if not hundreds of what we thought of as megaplexes for that day. Looking through your under construction pictures reminds me of at least half a dozen places I started working in while they were in that state. One in particular reminds me of this place as it had 5 auditoriums, Dolby in one house, and Eprad 2 channel in another.

I can recall two new theaters where we were installing drink machines and unboxing lobby furnishings as people were lining up at the door for the opening day. In one case they opened one house while seat and booth installation proceeded in the others.

They were pretty bland places and in some cases were identical as the company would not waste money on giving the theater a personality when they could just build the same place on a vacant lot. Did make it easy on me when I had to fill in at different booths around town as most of them had the same equipment.

Stan Malone – I don’t get over here to CT very often! Thanks for your comment (years ago!). Yes, those five and six-plexes were state of the art at the time, even the bare bones theaters like HP5. I was in the theater management business during a crazy transition time (1984-88)– singles and twins shutting down, cookie-cutter multi-plexes theaters sprouting, and old-school paper-and-pencil accounting going away in favor of computerization. I did another nine years at United Artists corporate headquarters in Denver in the 1990s, when the transformation into modern theaters (early experiments with digital presentation, 10-12-14 plexes began) was underway.

United Artists bought out Commonwealth Amusement in November of 1988. Aggressively building 6- and 8-screen facilities throughout the United States, UA started to weed out smaller theaters. It had 9 OKC locations at the start of 1989. A year later, it had just four. UA closed the French Market 2, Quail Plaza 2, Reding 4, and Shepherd Twin in 1989. It would retain both Heritage Park locations, its Almonte 6, and would keep the North Park quad a little longer before closing it.

On November 16, 1996, Hollywood Theaters took on the remaining United Artists theatres with the two Midwest City Heritage Park venues and the Almonte. Hollywood would join the megaplex boom soon thereafter operating the Spotlight 14 and Penn Square 10 as market-changers, Cinemark launched the Tinseltown USA and AMC opened its Quail Spring 24 in OKC.

Hollywood Theaters made it to the end of a 30-year lease as the Heritage Park Mall 3 as a first-run theater closing July 25, 1999. The circuit locked up the Heritage Park 5 after shows on January 31, 2006 and didn’t come back. The operator was likely assumed the end of a 20-year lease. But later in the year, it was sued for back rent payments with a November court order trying to evict the theater circuit. This appears to have been a successful plan and the facility was converted to a church.

kpdennis: During your days of working in the UA office in Denver did you happen to work with a Jay McIntyre? He would have come there from Atlanta where he was in charge of the assimilation of the newly purchased Georgia Theater Company followed by Litchfield as well. I think he was from Ohio or maybe Pennsylvania and his first duty was to get rid of every projectionist (union or not). His second job was to get rid of every inherited manager who did not measure up to UA standards, which of course was all of them.

When he left he said he was off to Denver to be in charge of in motion seating. That was some type of system where the seats were supposed to move or vibrate in sync with the screen action. At least that’s what he said. Regardless he said it was a big step up the corporate ladder since Denver was UA HQ.

Stan Malone, thanks for the thumbnail business history, interesting. Jay McIntyre- The name does not ring any bells. My last four years at UA, I was in the new business department, where we looked for alternative uses for the theaters during business off-hours. We did install one auditorium in Denver with video game controllers, for a movie system that allowed the audience to select options and direct the outcome of the film. Perhaps there was some other initiative Mr. McIntyre was involved with before the new business group began circa 1994 I was at UA until 1998.