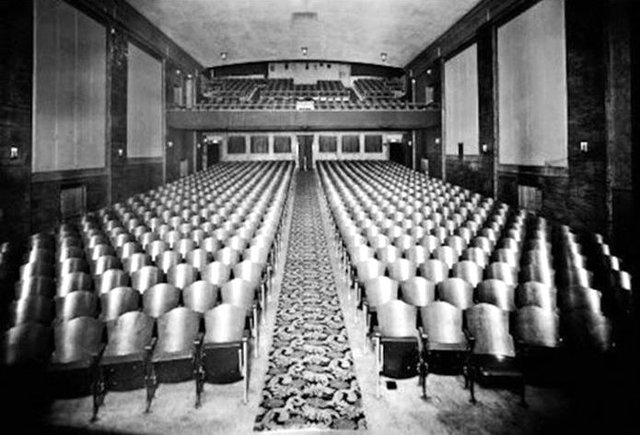 By April 1967 it was operating as the Capri Adult Theatre. It was closed in February 1968.

On the web site Okie mentioned above I found a movie ad listing for May 04, 1967 for the Capri Adult Theatre. The ad headline read “TORRID, SENSATIONAL ADULT ENTERTAINMENT” two double features “HOT NIGHT on CAMPUS” and “REPULSION”.
So the Capri was open at least up to that date.

To see a c1929 Paramount publicity shot of their new Circle Theatre go to below page, then type in word “theatre”. Once Circle Theatre image pops up click on it again for a large view -
View link

Curious, the auditorium archive photo posted on the OHS site must have been a pre opening shot. I’ve seen 1930s images of this same auditorium, and the sidewalls were painted with the “razzled-Dazzle” designs as described by OM. Backlighted grills on support columns do not show up in this image, but they were there.

My guess would be that it was the other way around, this photo was probably taken during the 1940s after the frantic jazz-age decor had been painted over, toned down, and “streamlined”. The isle carpet has a ‘40s pattern weave, and the auditorium does not look new.

It was the Capitol in the 1961 city directory:
http://tinyurl.com/pjgthe

In doing Capitol Hill research, I found a quite a number of Oklahoman ads for the Capri at 2510 S. Robinson, the earliest of which ads (the 1st was 4/4/1967) identify it as the former Capitol Theater. All ads were adult fare. The last mention of the Capri (or, for that matter, the same address on Robinson) was a 2/17/1968 Oklahoman article which said that the owner had been charged with exhibiting obscene movies for presenting the movie, “Whip’s Women” – a fellow named Whip was apparently the movie’s central character. I was unable to locate an article on the disposition of the charge.

This fine web page illustrates what a charming structure the old Circle Theatre (AKA-Capitol, Capri X) was. A member of the powerful Paramount Publix Circuit.
http://www.roadsideoklahoma.com/node/560

This reopened as the Capitol on December 25th, 1941. Small ad in the photo section.

I uploaded to the Photos section a July 1950 newspaper ad from the Daily Oklahoman, touting a Marx Brothers double bill.