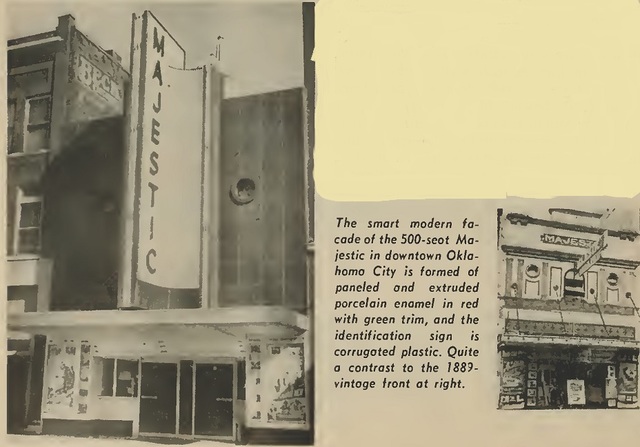 The Colonial Theater was opened on September 30, 1909. It was later renamed Majestic Theater. It was remodelled in a Streamline Moderne style in June 1952. It was demolished at the end of 1972.

This 1909 picture postcard shows the Majestic when it was presenting Orpheum Circuit Vaude and still known as the Colonial Theatre, seen directly above the word “WEST”…
View link
And here are color postcards from the same era…
View link

Vintage views of the Majestic Theatre can be seen here;
View link

This is a shortcut to the above mentioned photo of the tiny Majestic.
Note the Folly Theatre’s massive stagehouse soaring to the right of Baum’s wall sign.
View link

Another great photo Cosmic,thanks for posting.

You’re very welcome. I enjoy researching old movie houses and hotels, and like to share my findings.

We sure do enjoy everyone you get on.Thanks.I love old Movie ads from the good old days the 60’s-70’s.

Shown here are 1943 newspaper ads for the Majestic,
View link

An article about a remodeling of the Majestic Theatre on this page of Boxoffice, June 7, 1952, has four small photos of the theater. The article mistakenly says that the house was built in 1889, which is actually the year Oklahoma City was founded.

Architect J.Harry Randall practiced in St. Louis during the late 19th century. Around 1901-1904 he was working in Seattle, and by 1909 had established himself in Oklahoma City.

The news that J. Harry Randall had prepared plans for a $20,000 vaudeville theater at Oklahoma City for W. F. Burnell appeared in the August 7, 1909, issue of The Engineering Record. The house was in operation prior to October 17 that year, when the Oklahoma City Daily Pointer ran an article about various legal troubles Mr. Burnell had run into in connection with the Princess, Colonial, and Dixie Theatres, all three of which properties Burnell owned.

This opened as the Colonial on September 30th, 1909. Tiny ad posted.