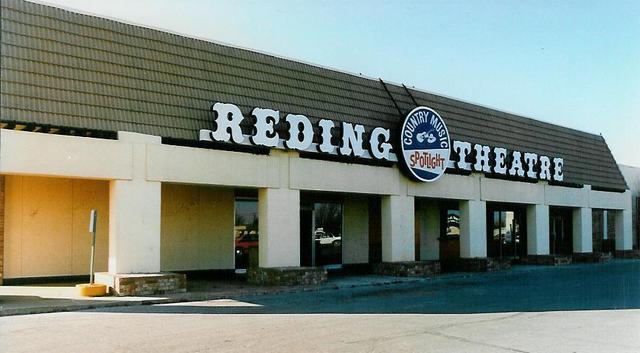 I served as a short-term manager at the Redding 4 for a few months in 1986, while a new theater in Midwest City I was set to manage (Heritage Plaza 5) was under construction. By this time, the Redding was in poor shape – its strip mall location was lackluster and the auditoriums were typical shoeboxes reflecting its early 1970s genesis.

It was the only Commonwealth Theater in OKC to offer regular midnight movies on Fridays and Saturdays – usually our two top features and two staples: Pink Floyd’s The Wall and a battered print of Rocky Horror Picture Show. The latter cult classic regularly attracted a tiny but devoted crowd of some very low-budget RHPS re-enactors.

This was a fun place in the late 70s. Hummm, think they had Cinemeccanica film towers. Also, pretty sure the business agent was there full time. I was a relief projectionist back then.

If the business agent was there it must have been an easy booth to run.Mike Local 629.

The photo looks more like a food store than a theatre.

Certainly does,but I have seen alot of Theatres on CT that look nothing like a theatre.

Comparing the photo from the 1990’s linked above with the Roadside Oklahoma photos, I’d say Roadside has the wrong part of the mall. There are some hefty roof supports in the older photo which do not appear in the later one; it’s possible those columns were removed, I guess. I drove through the shopping center about a year ago, and I could not tell which building housed the theater – and I worked there for about six months! But that was a couple of decades ago…

The name of the theater on this header should be “Reding” with a single R.

“The name of the theater on this header should be “Reding” with a single R.”

I think you meant to write that the header should be updated to read “Reding” with a single “D”.

Cooper Burks of American Automated Theatres Inc. (AATI) announced the Reding Movies IV as its first theater that didn’t have a single or twin screen set-up. The circuit had just 20 theaters in 1973 but announced that it would have 100 more in 1974, alone. But none of that really worked out and AATI stumbled failing to launch the four-screener.

Commonwealth Theatres picked up the project as the Reding 4 Theatre launching April 23, 1975 with 45 cent admission for films “Paper Moon,” “Neptune Factor,” “True Grit” and “When Legends Die.” The theatre had 4 identical 400-seat auditoriums for 1,600 total seats. United Artists acquired the theatre in 1989 from Commonwealth. UA closed the theatre on September 3, 1989 along with the Shepherd Twin, Quail Plaza, and French Market aging locations as it wanted to concentrate on 6- and 8-screen multiplexes instead of twins and aging quads.

The venue got one more shot as a sub-run discount house known as Dollar Movies 4 on January 4, 1990. It appears to have closed December 29, 1990 as many of the area’s discount theaters struggled in the video store age.