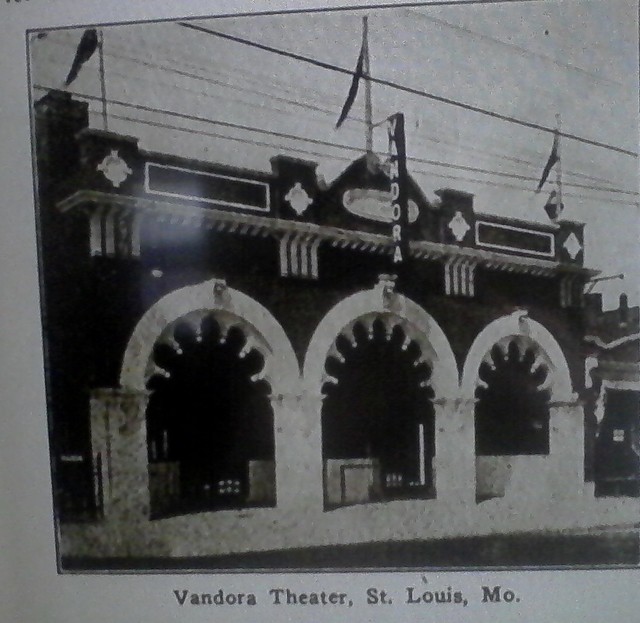 Building permit issued in December 1909 which means theatre opened in 1910. Theatre was listed in the City Directory from 1910 to 1918. Architect listed in building permit was O. J. Boehmer.

I understand that Joseph van Raalte was its president during those years; he was married to Dora (Kohner). Is there a relation between the name of the theater (Vandora) and Dora van Raalte?

Ad copy appearing in the St. Louis Times 4-25-10: Will Open Wednesday…The Vandora Theatre…Cherokee St. and Texas Ave…One Block West of Jefferson Ave. Will open Wednesday evening, April 27, with the best service of Motion Picture Films shown in St. Louis south of Walnut street and west of Sixth street. Miss Florence Lawrence, the greatest Moving Picture Actress in the world, will appear in the celebrated Imp Pictures included in our service. Pictures will be seen in this theatre the first day they are shown in the United States. Mr. Edward Savage, the popular barytone, and the Vandora Orchestra, under the direction of Geo. Eckhardt, Jr., will entertain with the latest songs and instrumental music. Our auditorium contains 5000 square feet of floor space, with seating capacity of 1000. In addition to the high ceiling and transoms on either side of the auditorium, we have installed 16 ceiling and wall fans and two exhaust fans to insure perfect ventilation. Admission 5 cents. Conveniently reached from all parts of the city. Change of program for this week only Wednesday and Friday. If you pay us a visit, you will be well entertained.