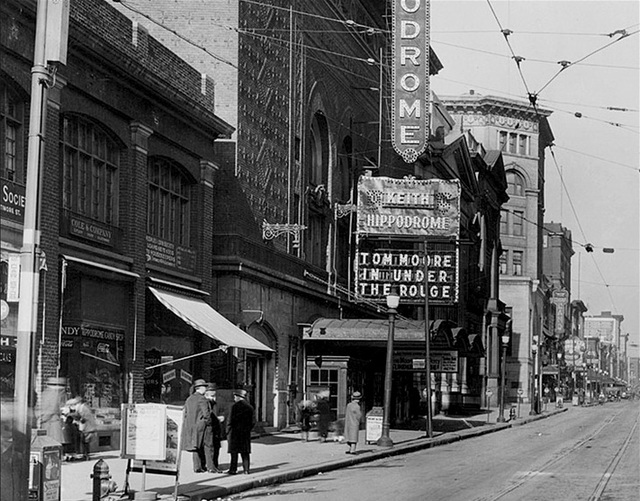 The Hippodrome Theatre is the last big movie palace remaining in downtown Baltimore.

It opened on November 23, 1914, with “The Iron Masters” on the screen and various vaudeville selections. The seating capacity was for 3,000. It featured Loew’s booking until 1924, when it switched to Keith’s time.

In 1931, it got a major facelift and an impressive new marquee, in a remake that contributed to what were probably the theatre’s best years, the 1930’s.

The theater’s last live show closed in 1959. In 1963, it held the Baltimore premiere of “Cleopatra”. This brought about an unpleasant renovation that included the removal of the theater’s side boxes. Additionally, the entire auditorium was draped in rose colored silk, resembling the world’s biggest casket interior according to a News-American columnist of the day.

After stumbling through the 1970’s and 1980’s, the theater finally closed on August 19, 1990. In the late 1990’s, the State of Maryland and the City of Baltimore launched an effort to restore the theater as the keystone of renovations to the surrounding shopping district.

The theater has been restored and incorporated – along with four other historic buildings – into the massive France-Merrick Performing Arts Center. The center, designed to spark a renaissance in Baltimore’s long-dormant Westside neighborhood, seats 2,286 and will produce over 270 performances per year.

Nice to see that it is still there.

Here is a photo circa 1980s:
http://tinyurl.com/yzkqlhg

It was 1950 or ‘51 when a few of us hooked school and went to the Hippodrome. I remember a big guy, a commedian, throwing himself off the stage into the aisle. Later, having breakfast across the street, he came in and was very loud and rude. Thinking it was Jackie Gleason.

This photograph of the Hippodrome Theatre was taken in 1932 by George Mann of the comedy dance team, Barto and Mann.

Thanks again Brad, like the Paramount in the background.

A more readable version of the Hippodrome grand opening ad

“While sadly I never got to meet him, my late grandfather was the band director at The Hippodrome until 1939 (pictured at the front of the musicians, with his hands crossed), co-founded the Baltimore Symphony, and co-wrote the Baltimore Colts Fight Song.”