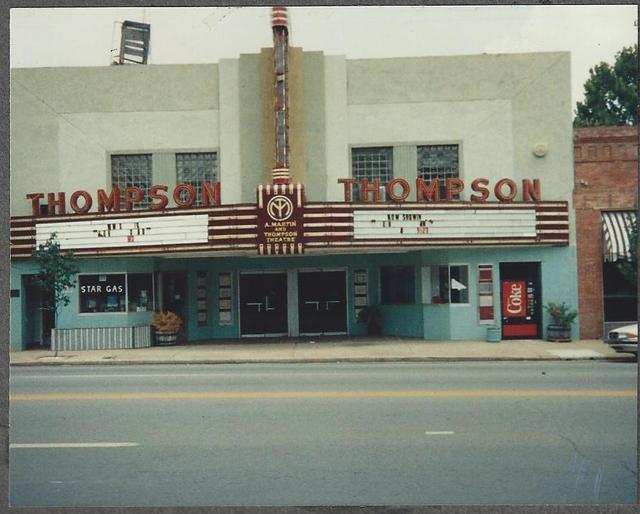 The Thompson Theatre, located on Commerce Street, was opened on August 9, 1948, replacing the Princess Theatre which had been destroyed by fire on February 11, 1947.

The 1950 edition of Film Daily Yearbook has the Princess Theatre, Commerce Street (525 seats) and the Thompson Theatre, no address or seating capacity which usually means it’s a new theatre and full details haven’t been forwarded on to F.D.Y. editors.

The Film Daily Yearbook of 1957 only lists the Princess. Same with the 1942 edition. Next step would be the check the local newspaper files, microfilm in the library, hopefully. Or the telephone directory for those years, again hopefully in the local library.

Maybe the fire was around 1950, and it was rebuilt around the same time, thus the reason for the differences in seating. The Film Daily’s probably just keep listing it with it’s old name.

My father worked for many years as the builder, architect, remodeler for Mr. Tommy Thompson. Hawkinsville was Thompson’s home, and the home office of Thompson Theaters. The office was located on the second floor next to the only theater in Hawkinsville. Thompson was originally Martin-Thompson Theaters before they split as partners. Many of the old downtown theaters in small town Georgia belonged to one or the other of this chain. At the height of his career, he owned almost 200 theaters in Georgia and North Florida. Many of the old drive-in movies also belonged to this chain. I can remember watching my fathers' crew build and scale those tall screens and the exciement of a new opening. I never paid to see a movie growing up, needless to say, I was a “cheap date.”

Hello all. I was too young to remember Mr. Tommy Thompson; but my mother worked for him for many years. Her name at the time was Mary “Eleanor” Wardlaw. The picture I chose as my avatar (if it shows up) is a picture of my Aunt Grace, My Mama, and Tommy. If any of you know any history of Mr Thompson or know of any site that possibly has archived photos. I am searching for anything that give me insight to the memories of this place as my mother passed away 22 years ago and this is the only site I’ve found about the theater. I have several pictures of my mother with Tommy and friends at event dinners. I’d like to glimpse at the history of this place!

My great grandmother owned several Princess Theaters, one of which was in my hometown of Hawkinsville GA. My grandmather took tickets and played the piano for the silent movies. My daddy Fred Ligget JR worked there as a young boy/man.

The Film Yearbook is inaccurate. John Herman “Tommy” Thompson opened this theatre on August 9, 1948 to replace the Princess Theatre. Thompson started his career at the Old Mill Theatre in Dallas and took over the Thompson’s predecessor in 1931 which he remodeled and expanded as the Princess. The Martin & Thompson Circuit headquarters were located within the building.

On February 11, 1947, the Princess Theatre burned down in a $125,000 explosion that led to the demolition of the property and damaged neighboring businesses. Thompson made changes to Hawkinsville’s City Auditorium to allow him to continue bookings and carry on the business of the Martin and Thompson Circuit. The theater that replaced the Princess was the Thompson Theatre that launched on August 9, 1948. The City Auditorium would be discontinued for film use but lived on in a massive $1.7 million renovation becoming known as the Hawkinsville Opera House,