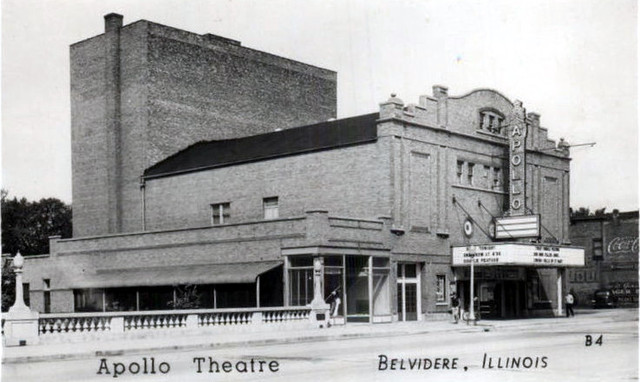 As evidenced by this recent photo, the Apollo Theatre (and its surroundings) is in bad shape, but reportedly on the rebound. Along with the theater, the downtown area of Belvidere was designated an Illinois Main Street Community project in 1996 and funds have been allocated to restore the city and the theater. It’s clearly coming along slowly, but the old theater, which opened in 1921 went over to X-rated films in 1971 and was re-named Cinematix 770 and from 1974 was known as the Dollarodeon (a play on words of the old nickelodeons) showing regular movies for a dollar.

Megan Sawchuk of Belvidere Illinois writes as of 9/11/02, “The picture provided for this theater shows construction in front of it, but it is not for the theater. The bridge over the Kishwaukee river is right next to it and it was being rebuilt.

“It still has the marquee sign out front, but it just says ‘Apollo’ in big letters. All of the original furnishings have been discarded. This includes the original curtains, which were really something nice, and all of the seats.

“[The theater] never looked as shabby as it does in that picture. I used to work across the street from there and i was there during the construction on the bridge. There is also a mural on the wall that is on the right side of the picture. It’s a Mexican heritage mural.

“It’s a shame that none of the integrity could be salvaged in this building.” It now is now in use as a banquet hall known as the Apollo Activity Center.

Ohhh, I remember the food drives. They used to do them for the all night fright fests on Halloween weekend also. The Dari-Ripple was good too. Drapers ran it when I was a kid. It’s still open. I was there a couple weeks ago and almost stopped. I have to drive down through Belvidere to pick up my wife at Ohare next week so maybe I’ll treat her to a Banana Split from Dari-Ripple. Remember Doc Knapps? It closed a few years ago, adn I just read a couple of weeks ago that Doc passed on. It bummed me out. He was great to those of us who couldn’t afford to stop much. He’d give us what he called “wonderful water” on our way home from school. It was really Sprite or 7up and it was alway great. Darn, I know your name. I went to school with a lowery boy back in the 1970s. Is he related to you?

I rode by the Apollo today, and it looks a lot better than it does in the above photo. The marquee has a new-looking sign that says “Apollo Banquet Hall,” though the phone number is unchanged from before. The front of the building, including the ticket window, looks beautiful. Unfortunately, the windows are covered with black fabric, so one cannot see inside.

I’m not sure if the mural changed, but the one on the building now is in tribute to all Latin-Americans, not just Mexicans.

Current photos of the Apollo

how much would it cost to purchase the theatre and what would the terms of use and service be?

Who said any of these buildings you are asking about are on the open market?

Well, I’m looking for some good space like a theatre for some plans I have for the surrounding community. This isn’t the only theatre I’m looking at. I know for a fact that the Midway theatre in Rockford is up for sale…it never hurts to ask…

Not all of the seats we’re take off it still has the ones on top and inside is pretty nice. It has a pretty nice bar and its not a mexican dance club. Its a banquet hall. People can rent the place for weddings and sweet15 or 16 for any kind of party. And its also used for concerts. I know this because my husband’s uncle owns it and I’ve been there.

A list of U.S. radio stations broadcasting as of May, 1923, includes station WOAG, located in the Apollo Theatre, Belvidere, Illinois. A chronology of early radio says that WOAG began broadcasting in October, 1922. The Federal government began licensing radio stations for commercial broadcasts in late 1920, so WOAG was one of the fairly early ones.

I’ve come across references to a late 19th-early 20th century theater in Belvidere called the Derthick Opera House. Some sources say that it was next to the river. I think it might have been on the same site as the Apollo. The November, 1917, issue of Safety Engineering reported that the “Dorthic” Opera House at Belvidere, Illinois, had been destroyed by fire on October 1, 1917. This publication also said that the theater was next to the river.

The December 6, 1913, issue of The Moving Picture World said that the Zimperhoff Brothers, of Chicago, had been negotiating a two-year leas on the “Derthofk” Opera House in Belvidere, with the intention of operating it as a movie house. I’ve been unable to discover if they got the lease, but given the state of the theater business in the 1910s, odds are good that the Derthick did show movies in its last years.

Im not sure what date it is but inside of the apollo there’s a plaque where it has the name of the person who first owned it and build it and it also has the date of when it was built. Im not to sure of the history of it I just know its been there for a while. I think its so cool to go into places like this. I guess because it so historic.

Grew up in Marengo and went to the Apollo with my parents and my grandmother….fond memories…