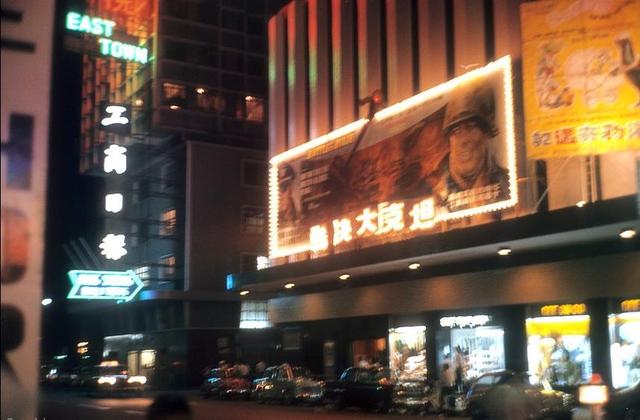 East Town Theatre was the first luxurious theatre to be built in the Wanchai district of the Hong Kong Island after WW II. The proprietor of the theatre was the Hotung family of Hong Kong. Mr.Hotung was a famous businessman and philanthropist of Hong Kong in the last century.

The theatre was opened in 9th February 1964 and the first film to be shown was “Copacabana Palace”. In February 1974, after the showing of “Paper Moon”, the theatre closed its doors forever.

The apparatus of the theatre was one of the best in Hong Kong in 1960’s, and 70mm version of films could be shown in the theatre. The width of the Hi-Gain pearl-finished cinema screen was 50 feet.

Since the theatre was built on the site of a demolished funeral home, ghost stories were heard from time to time in 1960’s and early-1970’s. One of the frequently heard stories was of a spirit who resided in the ladies' restroom and liked to place its head in the washing basin and combed its hair leisurely in front of shocked patrons.

The theatre was a first run theatre showing English language films as well as some Japanese and Mandarin-language films.

The ground floor of the theatre was a mini shopping centre with the cinema auditorium on the second floor.

As the theatre was near Fenwick Pier, it was frequented by American soldiers who were on holiday in Hong Kong.

This theatre was my favourite, and its demolition in 1974 was a great sorrow to me.

The ladies restroom of the stall was on the mezzanine floor under the screen.

I saw “My Fair Lady” in 70mm version twice at this theatre.

Before its demolition in 1974,the shopping centre on the first floor was converted into a warehouse for storage of newsprint.

The theatre closed on 8th February,1974,and its last film was Paper Moon".

How about this postcard… a gem.
View link