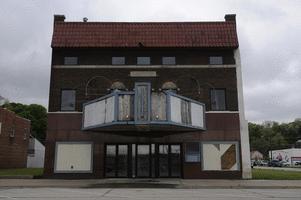 The Strand Theatre opened in 1921. From December 22, 1967 it operated as an adult movie theatre and was re-named Studio Cinema. It closed as a movie theatre in 1969 and was last used as a adult video store store, which closed in August 2005. It has been vacant for the last several years and by 2017 the building is owned by the city of East Moline.

The Strand is still standing and will be re-opened sometime in 2008.

The theater was open into the 70’s and called the Studio. I saw Deep Throat there. Really!

From a 2009 QC Times Article: “After the war, (Jim) Stopulos sold life insurance briefly and then opened the Coronet Theater on Davenport’s Washington Street at the suggestion of his brother-in-law, who ran an art theater in Iowa City. Later, he moved the Coronet to what had been the Uptown in the Harrison Hilltop neighborhood.

During his 25 years in the theater business, he also owned the Sierra in Moline, the Spruce Hills Twin in Bettendorf, the Central in Geneseo and the Strand in East Moline. He remained in the theater business until 1976, a time when competition from big chains made it difficult for independent operators to survive.

The Studio Theatre (aka the Studio Adult Video Center) was purchased by the city closing in August 2005. The adult video theater moved less than three blocks away that month.

Nameplate on the facade is G. Carpentier. The first owner, or just a speculator who built it? By the way, there are some much better pictures than the blurry low quality shot currently used.

A November 20, 1954 Boxoffice article about the closing of the Majestic Theatre named the operator of the house as Emil Carpentier, and noted that he would remain active in the theater business with his son George, operator of the Strand, East Moline’s last movie theater. He also had a brother named Charles, also interested in the East Moline Theatres Corp., but in 1954 he was serving the first of three terms as Illinois' Secretary of State.

The June 26, 1920 issue of The American Contractor has an item about contracts being let for a $100,000 theater at East Moline for a G. Carpentier, and it gives the name of the architect simply as Garside, of Davenport, Iowa. I’ve searched extensively and can’t find any other references to an architect of that name, so I suspect it might have been a typo, though Garside is a real (but not very common) surname.

The July 3, 1920 issue of Moving Picture World had this item about the Strand:

The much older building (at dating to at least 1912, and probably earlier) across the intersection also has a G. Carpentier nameplate. It was a saloon on the side with the corner entrance, a store on the other, and apartments upstairs.