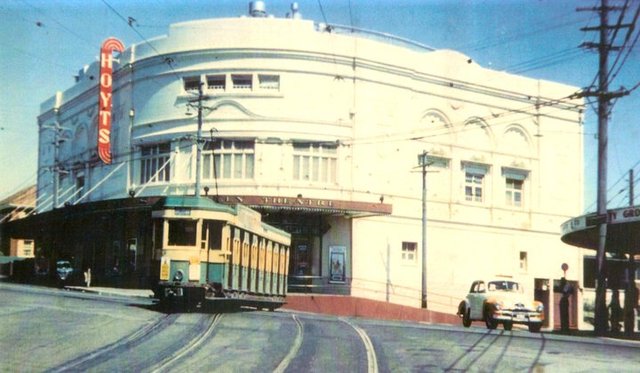 Located in the Sydney suburb of Clovelly, the Clovelly Theatre opened on 5th October 1923. Later taken over by Hoyts, the theater closed in 1960 and was demolished for the construction of a gas station.

This huge corner/junction cinema held about 1600 and closed in April 1960.
Apparently (according to my parents) it was still very much a 1920s style and had that old classy hotel feel. It ran stylish films and one of the last SEPARATE TABLES really suited the decor of the cinema too. In 1960 it was only open on saturdays from 5.30pm and ran a double feature, repeating the first film again at 9.30pm. It seems quite a few Saturday only Sydney cinemas (like Hoyts at Hurlstone Park) also ran this way, Adding a kids matinee at 1.30..sometimes. However, they did not make it through winter 1960 and quite a number of this type of operation shut that year. The photo above actually comes from a Tram Buffs book, and if you have the chance to get and of these tram books, there is alot of pix with cinemas in the background, since the stops were often at the cinema door, ot the cinema was at a junction that allowed for good tram pix. Try and find them or go to the tram buffs sites or club contacts, you will be suprised how many unseen cinema photos turn up this way. The site is still a petrol station. Boring.

Hoyts Clovelly Theatre was in “Adam style” architecture with an arched proscenium. It was never modernised like some of the others.
It was of most unusual construction. It was designed by Charles Bohringer. The photograph was taken by the late John Alfred in May,1957. The tram,one of Sydney’s old “toastracks” is shown heading back to the city.

Originally opened as the Clovelly Cinema in October 1923.

The photo above is new and replaces the 1950s pic with a tram.

Where was that tram running to and from? It looks like the tram might have come out or the theatre building!!? The petrol station is Shell.