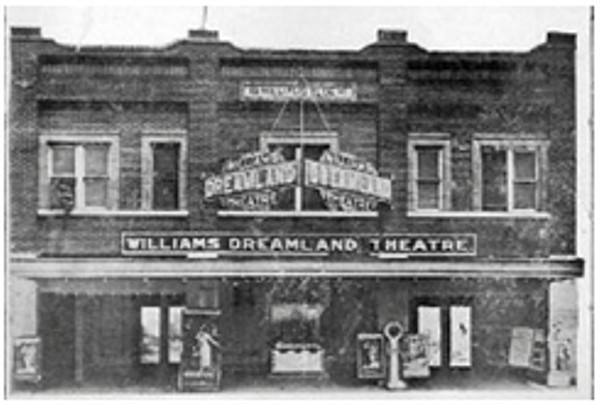 The Williams Dreamland Theatre was located in the Greenwood District of Tulsa. It opened on August 30, 1914 and showed live musical and theatrical revues as well as silent films. It seated 750 and was operated by John and Loula Williams.

During the Race Riot on April 1, 1921, the Dreamland Theatre was one of the places that community members gathered during the chaos to organize and develop a plan of action. Ultimately, the theatre was destroyed when 35 city blocks of Greenwood burned as a result of arson during the riot. It was rebuilt as the New Dreamland Theatre (which has its own page on Cinema Treasures) and operated into the 1950’s as an African-American movie theatre.

Interesting info on North Tulsa theatre history, including the Dreamland, can be found here;
View link

Article about the 1921 Tulsa Race Massacre in which the Dreamland and other theatres were burned in the are known as Black Wall Street.

The CNN documentary “Dreamland: the Burning of Black Wall Street” recounts quite powerfully the events of the 1921 Greenwood massacre and has numerous references to the theatre and a recurring image of the place.

Williams' Dreamland Theatre launched here on August 30, 1914 next door to the Williams' Confectionery that had opened five years previously. It was the second of three Dreamland Theatres although the first was an unrelated nickelodeon in Downtown Tulsa. The $10,000 theater was created by John and Loula Williams who had established a confectionery next door and a popular car repair facility elsewhere.

The Williams would follow up the success of the Dreamland with two more Oklahoma locations - one in Muskogeee another in Okmulgee. But the original theater had an infamous ending. The Tulsa newspaper listed the theatre as one of the many destroyed businesses - along with the neighboring Dixie Theater - during the Tulsa Race Massacre in the early hours of June 1, 1921 ending the venue’s run during showtimes on May 31, 1921.

The Williams created a New Dreamland Theatre in the same spot a little more than a year later opening in 1922. It has its own Cinema Treasure listing. This listing should undoubtedly be listed as Williams' Dreamland Theatre as that was its name on the exterior of the building.