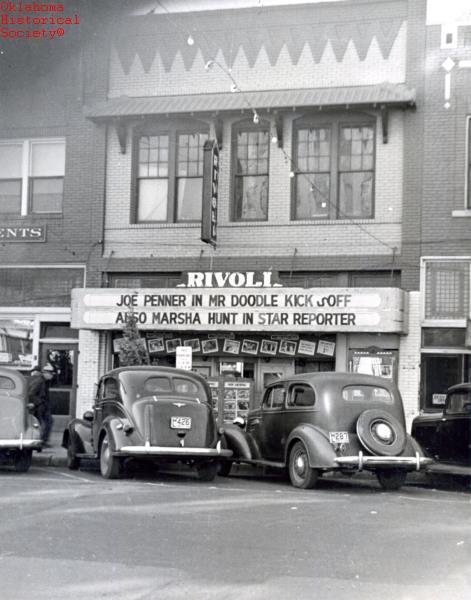 Listed in the Film Daily Yearbook, 1941 edition as having a seating capacity of 300. Same details in the 1943 edition but it is listed as ‘Closed’.

Does anyone have additional information/photos about this theatre in Enid? I have friends who live in the Enid area and will have to ask them about this one in their town.

Miss Melba Toast: When I typed in the word “Rivoli” an interior theatre in Blackwell came up.

Then typed in “Rivoli Theatre in Enid OK” and found the interior/exterior shots. What’s the latest status on this theatre?

When I type in “Rivoli” images of the Enid Rivoli appear at the bottom of the listings, below Blackwell.
Strange, the name Rivoli would suggest an Italian heritage, but (to me) this facade has an Oriental flair.

Found here are vintage images of the simple, yet functional, Rivoli Theatre …
http://www.roadsideoklahoma.com/node/359

The Rivoli was located at 115 E. Broadway and was in business from 1938 to 1942. It was operated at least part of that time by the Griffith Amusement Company. The location is now a parking lot across the street south from the Broadway Tower. According to Enid City Directories, in 1935 this was the Rita Theatre and in 1937 the building was vacant.

This is interesting. The 1937 Enid City Directory lists a theatre at 119 S. Grand called Gray’s which was managed by John S. Bonner. I wonder if John Gray built Gray’s Theatre, sold it in 1938 (to whoever opened the Royal Theatre) and opened the Rivoli, especially since the space where the Rita Theatre had been located at 115 E. Broadway (where the Rivoli eventually opened) was vacant in 1937? The two theatres would have been located within two blocks and just around the corner from each other.