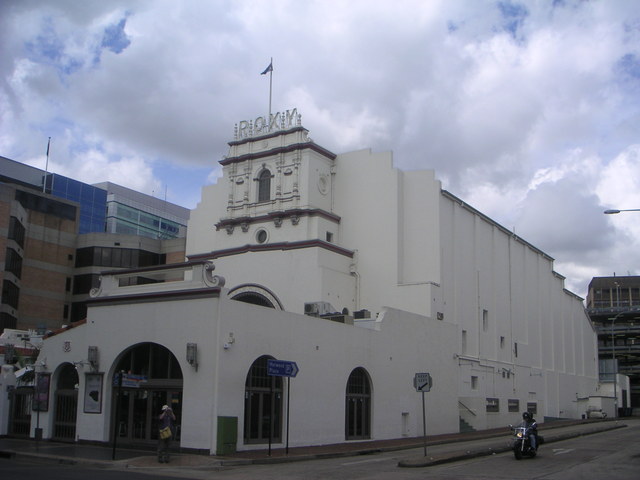 The 1,950-seat Roxy Theatre, located in the western outer Sydney suburb of Parramatta, opened on 6th February 1930, with Maurice Chevalier in the film “Innocents in Paris”.

The theater’s main entrance is surmounted by an impressive arch and an ornate quasi-Spanish Mission style tower. The open forecourt is flanked by an arcade of shops.

Originally, the theatre featured a Christie 3Manual/10Ranks organ which was opened by Eddie Horton. It cost approximately $AU32,000 and was reputedly the largest organ to be installed in an Australian theatre. Other organists who play this instrument include; Horace Weber, Desmond Tanner, Denise Palmistra, Paul Cullen, Knight Barnett, Ruby Coulson, Ray Chaffer, Nicholas Robins and Owen Holland. In 1958, it was dismantled and sold, and now resides in nearby suburban Castle Hill Entertainment Centre.

One of the foremost Australian theatre circuits Hoyts, purchased the property in 1946. During World War II, for safety reasons, the beautiful ceiling lights in the auditorium were removed and never replaced. The ceiling dome still remains intact.

In 1974 Hoyts attempted to sell the Roxy Theatre, but the National Trust of Australia, classified the cinema as an important example of a suburban picture palace. Because of this ruling, Hoyts decided to carve up the magnificent Spanish auditorium into three cinemas in 1975 at a cost of $AU1,200,000.

It reopened as a triplex on August 27, 1976. The beautiful proscenium was lost when a wider screen and new curtains were placed further forward into the auditorium. However, the ceiling and upper section of the auditorium, the foyers, the front courtyard, and facade were left intact. Under the balcony was divided into two screens, while the main auditorium served as a third screen.

After laying empty for a period of time, the building was purchased by new owners who commenced a renovation of the building. It re-opened in early-2006 as an entertainemt venue, with restaurant, bars and a 700 seat cabaret/music venue in what had originally been the former balcony area. This closed in 2015.

In 1974 the Roxy Theatre became the second cinema in NSW to be classified by the National Trust of Australia.

www.theroxy.com.au
The website features photos of the building as it is now

A vintage photograph of the Roxy Theatre in the 1930’s:
View link

I have lived in Parramatta for 20yrs and used to go to the Roxy regularly even before I lived here. My girlfriend (now wife) was from Carlingford and we used to have a movie deal where we had an Italian meal at one of the shops alongside the forecourt and a movie for $11 each. My wifes family are 5th generation Parramatta people and my mother in law remembers when the Roxy was opened there were large spotlights either side of the door at the top of the stairs that lit up the night and the street was very alive with people.

I visited this theatre during a school holiday performance. The film was Supergirl and they had a young boy playing a Hammond Organ. In the overview it mentions a Knight Barret playing the original organ however his surname was actually Barnett I have a copy of an LP record of him playing at the Conn theatre organ in Adelaide

As assistant operator to Cecil De Lorey IN 1967/68 it was a great theatre to work , Cec was a top teacher ,to much more to mention , although the way I gained entry to the place to start work to this day after all mods over the years has not been changed:.My secret.

The Roxy was recently under threat again and is currently closed.