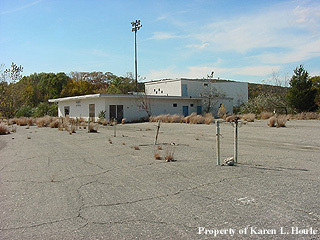 The Norwich-New London Drive-In was opened April 8, 1950. Initially a single screen drive-in with a capacity for 1,100 cars, it was operated by the E.M. Loew chain. A second screen was added in April 1972 and the capacity was increased to 1,400 cars. In the summer of 2005, it was for sale and has playgrounds, in-car speakers and a flea market.

In the late seventies, one screen went to softcore sexploitation films, which caused some dismay when the other screen would be showing all-age fare, as anyone could look out the back of the car window to see the other screen. It’s amazing this land hasn’t been developed yet, given the proximity to the two new big casinos, Foxwoods and Mohegan Sun.

The above address will map accurately to the location of the drive-in, which is visible on Google Earth using present day imagery.

Just discovered that this propery is valued at almost 2 million dollars! Dorothy Wallman, of Peabody, MA, is handling the estate of Melitta Lowes and should really think about doing something with this property! Bring the movies back we Montville residents say!!!

Address above. Selling for an undisclosed amount. 23.5 acres. Saw potential buyer today. Hoping they will bring back the drive-in!

I hope they can reopen this theater. Looks like it has a good potential.

Corrections – the Norwich-New London Drive-In Theater opened April 8, 1950 (not 1955), on a 17 ½ acre lot purchased by operator E.M. Leow from Walter and Helen Chabasinski for $100,000. Built by Bruno Weingarten, the opening night included a double feature of It’s A Great Feeling (starring Dennis Morgan, Jack Carson) and Sand (Mark Stevens). In December 1971, construction began on a second screen and an expansion of the physical lot, increasing car occupancy from 1,110 cars to around 1,400 for its reopening in April 1972 under a new marquee, now proclaiming it the Norwich-New London TWIN Drive-In. Bruno Weingarten’s wife Beatrice and her family continued to run the theater with the Leows after he died in 1978, through its closure in the mid-1980s.

The east screen was the original theater. The original booth on the east side was removed during the renovation. It was about 1/3 of the way back from the screen which was damaged and removed after the theater closed. The booth sat very low in the ground with a high angle to the screen. The new snack bar and with the projection booth on the roof was at the back of both theaters. The projection lamps were ORC (Optical Radiation Corp) 6000’s the most powerful available at the time. The booth was so far from the east screen that we could not get a bright picture. The west screen was bright, but when wet, it made the light reflect back. The projectors were Century 35. East had new ones with Century optical sound, while the west projectors were an older Century projector with RCA sound heads. They both ran beautifully. Towards the end of my time there, Cinema Radio had been installed on the East Screen. The speaker posts and electric in car heater posts were not removed. On opening night of Mame 1975 with Lucile Ball, both houses were packed. Right after intermission, the rain came and it poured so hard, the the light from the east side formed on the rain – less than 10 feet in front of the booth and didn’t reach the screen. Along the corner of the snack bar/ booth which was on the roof was our main field light tower. I was just lifting the reel up to the upper spindle when lightning hit the field light poll. The system we used was known as semi automatic. I never used it preferring the old fashioned method of changing over, but the movies were loaded on large house reels Max 3 reels to 1. I dropped the reel to the floor and scrambled out of the booth and down the stairs, where I insisted that Bruno give out fog passes because, I wasn’t going back up there again tonight. Dave the manager calmed me down telling me that a spark or flame had just shot out of the pizza oven and reached all the way to the condiment bar, and besides, Bruno and Bea had already left with the receipts and the fog passes. Not over yet, I slowly went back up the stairs. The projectors were still humming along. The West screen still had about 25 minutes before change over. So I picked up the reel again, lifted it over my head, again and moved toward the upper spindle. The lightening hit again on cue. It sounded like someone had fired a gun behind me and reel fell to the floor again. I sat on the stairs until I was ok tried a third time and succeeded. At the end of the show there was one car left on the lot besides staff. The storm did something to it. Anyway, I loved that theater, the booth, standing on the roof and seeing all those cars on both screens and waiving to my wife and babies who were playing on the playground many nights. Bruno was the coolest guy I ever met, and I am sad to see the current or at least 2005 condition of the Norwich New London Twin Drive in, the only Drive in that brings you two fine shows. Bruno. Tom Beebe Operator

In these coronavirus times, this theater should be re-opened!

For my senior research project, I decided to focus on how drive-in theaters could be brought back into popularity. I focused on abandoned theaters because I knew the land wasn’t being used, like how open theaters or demolished drive-in land typically is. I came up with 3 different options for properties and events that could be held at each. This theater was one of those options and I am glad I took it. I originally did a site visit back in April of 2021 peering at it from the road. The current condition is the following:

I was happy to focus on this theater and the changes I made. Screen 2 was redesigned and I have created a 1/250th scale model of the property measuring at 6 feet by 3 feet.

If anyone is curious to know more about my research and focus on this theater, please feel free to respond.

That’s all folks! Drive home safely. Thank you, and goodnight!