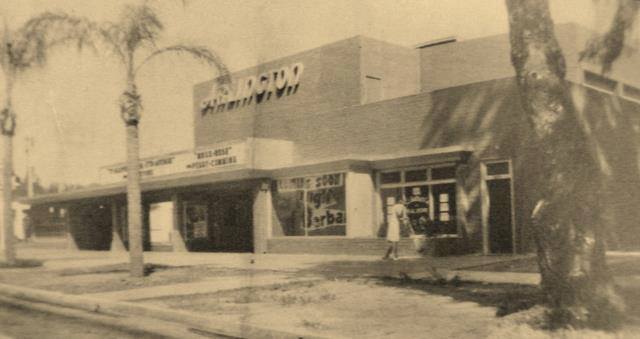 The Arlington Theatre, a neighborhood theatre built in 1946, was a nice example of post-war modernism, with a brick exterior and clean straight lines. It was built about six miles away from the Fox Theatre in downtown Riverside and was always an independent. With the advent of multiplexes, it’s single screen finally made it obsolete and after several managements, it closed for good in 1987.

The Press-Enterprise says that in 1988 a developer gutted the building, removed the balcony and marquee and leveled the floor. Even then it found no success as a nightclub or antique mall.

In 1995 the city finally bought it for $530,000 and demolished it, with plans to build a library close to their 1909 Carnegie library. The city is still seeking funding for it.

There are two other long-gone theatres listed in the Arlington neighborhood, the Airdome and the Chatterbox Theatre.

I grew up in Riverside and saw several movies at the Arlington, including my first viewing of “Gone With the Wind” in 1962. I also saw “Quo Vadis” there at about the same time. It was a pleasant theatre, small and on one level.

We saw Fox and the Hound Here, Lord of the rings animated and The Octagon, really good times.

Here is a brief item about the Arlington Theatre in Riverside, with a small photo of its recently remodeled front, from the September 7, 1957, issue of Boxoffice.

I worked at the Arlington and and loved this theatre. While I have great affection for the DeAnza,The Arlington was always my favorite because of its sleek modernistic architecture.
Inside and out,it was incredible moderne building with features such as freeform ceilings with recessed multicolored neon that would changed color to match the weather outside and a neat deco box office made of glass cubes and textured flutex. Very cool!

Prior to 1957 the exterior was very stark and minimalist in nature with only the “Arlington” sign in neon across the front and a small rectangular marquee over the parking entrance. In 1957 the owners made the brilliant decision to update the exterior slightly by adding a flashing parking arrow sign and stunning custom made futuristic marquee with a giant boomerang that jutted defiantly skyward like a tailfin! The end of the boomerang had many little multi color neon bars that “chased” upward from the bottom of the boomerang to the top and the four neon squiggles (two on each side of the boomerang section of the marquee) would flash on and off alternately. It was breathtaking at night,a stunning vision of the world of tomorrow inviting the public inside to escape for a while into a world of film fantasy.

Over the years as society went downhill Ugly,sterile,cookie cutter multiplexes and the advent of VCR’s drove bussiness away from the beautiful single screen older theatres. it became run down,idiots threw rocks and broke the neon on the marquee,it stunk inside and the air conditioning didn’t work and the owners were to cheap to repair it. It shut down for a while in the early 80’s and was eventually bought and refurbished and given a second chance in the mid 80’s,but only lasted a few years before closing down permanently. I remember being lucky enough to see marquee one of the last times it was fully lit and working. It was a work of art.

I was furious when it finally closed and It was sheer idiocy that it was ever allowed to be torn down. It should have been selected for preservation. were a multi millionaire I would have saved the theatre for future generations to enjoy.It was by far the most beautiful building in riverside and had the coolest marquee I have ever seen on any theatre anywhere. There are things in life far more important than money and preserving the past is one of them. The Arlington should still be standing today as a powerful reminder of our better days and what we were capable of,it was a work of art and a place that brought joy and good memories to thousands over the years it was there. The loss is immeasurable. We live in a society of fools all to quick to throw away the past,it’s just change for changes sake,it doesn’t seem to matter these types that what replaces it is inferior on every level to what came before.

I can’t believe we are so short sighted and that nobody saw the beauty of the architecture and felt it was a worth saving. I would have been great for showing vintage films and having three stooges film festivals and 40’s 50’s cartoon matinees on the weekends for family’s to enjoy.

By the way the site the Arlington once occupied has been sitting as an empty field since 90’s and the city has never done a thing with the property,but yet it was so darn important to rush and tear it down. The City officials responsible should all be horsewhipped. They destroyed the DeAnza theatre too. It was closed and gutted and turned into a Clarks nutrition center.

If anyone out there has any vintage photos of the Arlington theatre or any old advertising material etc from the Arlington I would be very interested.

My sisters and I grew up on Taft Street and walked to the Arlington Theater every week. A lot of good memories. I would love to see the old photos of the Arlington. Our father had a gas station down from the theatre. It would be wonderful to see vintage photos of the street they were on.

Hey! My band played there in the 80’s…I have a flyer that listens the address as 9670 Magnolia. Fwiw!