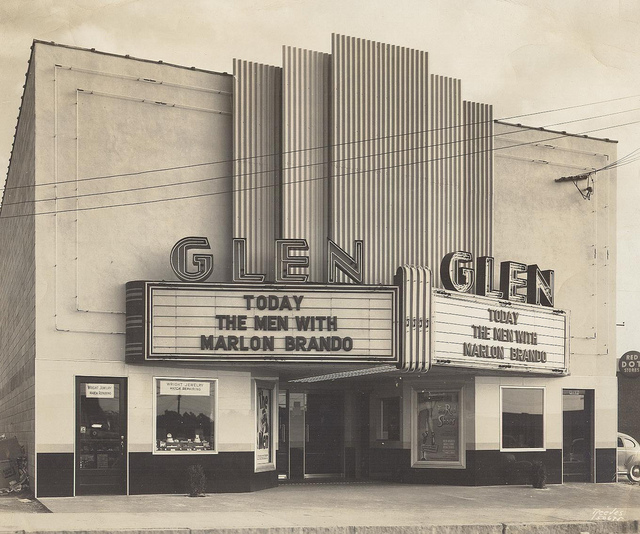 I remember the Glen Theatre very well. When I was a kid, a lady named Miss Mandy Reese used to drive me, my cousin Bo, and a good friend of ours named Wicky Boyd from Palmetto, Ga. to Decatur every Saturday morning to clean the place up. This was back in the late fifties-early sixties. Miss Mandy would pay us fifty cents each, and we could keep any loose change that we found.

Henry, do you remember the name of the theater that Mr Greene owned in Palmetto. I remember that it was in a Quanset Hut type building and had a balcony for Blacks.

Ron – Thanks for sharing your great memories – and for the link to the photos! Whenever I post my own memories of these theaters, I always hope that someone who knows more will join in the fun! I remember attending The Glen from about 1957-1965, when it was becoming somewhat seedy. Nevertheless, The Glen was great fun and I remember it very fondly!

See new Photo of Glen in 1953 that I just posted.
http://www.flickr.com/photos/rgw55swd

Thanks for the photos Ron W.

My father and two partners bought the Glen from Mr. Green in probably 1964. My father’s theater booking agency represented the Glen so when Mr. Green said he was going to close it, they made their move. We operated it for about 18 months, then the burden of it got to be too much. I generally operated the concession stand on Saturdays, Sundays and some evenings. Fellow named Gene was the projectionist. Very neighborhood house, mostly teens coming in during the week to neck, weekends for the socializing and the action pictures. After they sold it to a Cuban, he flipped it to the prono house. There was a Krystal across the street, a drug store down the corner to the right, lots of parking out front. Faced west, so the setting sun flooded the lobby. Lot of fond memories. My dad kept careful note of the time of the last ticket sold so we could shut the place down when the program came back to that point. I was 16, 17 at the time.

Where did you find the info about opening date?