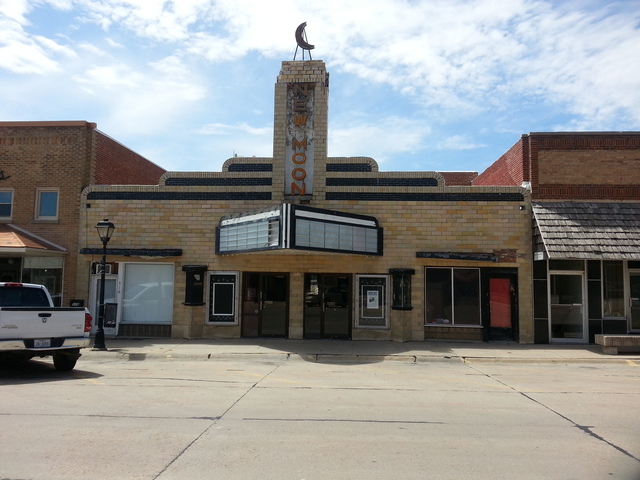 Replacing an earlier Moon Theatre which was damaged in an explosion on March 10, 1944. Opened on September 28, 1944, the New Moon Theatre was a single screen theatre showing first run movies. It was operated by J & J Theatres and was closed by July 2016.

The owner of this theatre also owns the Starlite Drive-In located in Neligh, NE.

The New Moon was a wartime theater, featured in an article published in the December 2, 1944, issue of Boxoffice Magazine. It was designed in a simplified Art Moderne style by Omaha architect H.A. Raapke, a member of the Modern Theatre Planning Institute’s board of architectural advisors.

Materials used in construction were confined largely to those not restricted by the War Production Board. Raapke chose to use a stone base surmounted by glazed brick in black and cream for the facade, and the entrance lobby was floored with asphalt tile in a herringbone pattern.

Pre-war carpet was found for the inner lobby and the auditorium’s aisles, and both inner and outer lobbies received wallboard paneling with an imitation walnut finish. The ceiling of the 552-seat auditorium featured three offsets concealing indirect lighting from fluorescent tubes, and the walls were paneled in an acoustic material. The auditorium’s decoration was mostly stenciled, some of it using the crescent moon shape which was the theater’s signature. The theater’s facade had a small central tower surmounted by a neon crescent moon.

The original owner-operator of the new Moon was Mr. W.B. Bradley. The town of Neligh had a population of 1,649 at the time the theater was built.

In the architect field above, the surname Raapke is currently missing the “e” at the end.

A recent photo by David Hunnicutt depicting the New Moon’s tower and the upper edge of its facade can be seen this web page.

The December 2, 1944, Boxoffice article with photos of the New Moon as it originally looked is now available from the magazine’s online archive. The article begins on this page. More photos are on the subsequent page, and additional text is on this page.

The New Moon replaced the previous Moon Theatre opening on September 28, 1944. The original Moon Theatre suffered an explosion on March 10, 1944 that destroyed the west side of Main Street taking it, the J.C. Penney store, a jewelery store and a drug store. Witnesses said the roof of the Moon was lifted off by ten feet and window damage was a block away. Operator Walt Bradley moved future screenings to nearby Clearwater’s Palace Theatre until the New Moon’s launch.