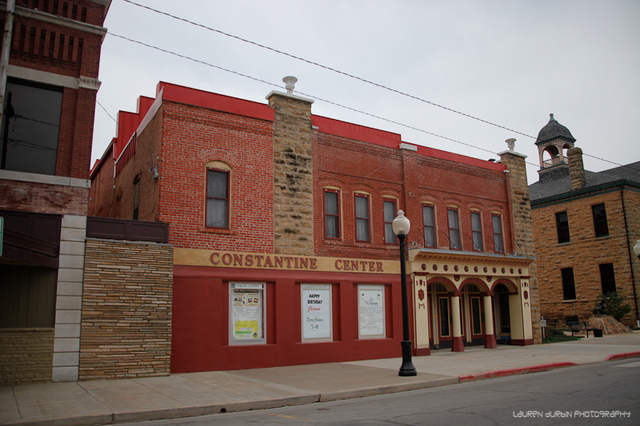 The theater was originally built as the Pawhuska House Hotel in the 1880’s. In 1911, Mr. C.C. Constantine purchased the building and remodeled it into the elegant Constantine Theater.

The theater was closed in 1970, after many profitable years. In 1987, a group of concerned citizens led by Eileen Monger, began a long, tedious renovation. It is now complete, with a live stage in Greek Revival Style and a seating capacity of 589 and outstanding acoustics. The theatre is listed on the National Register of Historic Places and the National League of Historic Theatres.

The Constantine is also known for being haunted. According to witnesses, sounds of a barroom brawl can be heard in the historic theater.

The Constantine is currently being used for a variety of community events. When I visited it this summer, it featured a Native American speaker and was to host a number of other events later in the season. According to an active community member, the Constantine doesn’t show movies at this time. In fact, Pawhuska doesn’t have a movie theatre. The citizens of Pawhuska should be quite pleased with the restoration efforts. The lobby boasts a gold and burgandy color scheme featuring a brass chandelier. The exterior also features the gold and burgandy colors and is quite eye catching. I have photos to post asap.

At one time or another this cinema must have been known as the Kihikah Theatre. Look at this 1963 snapshot and see what you think, type in word “kihikah”, then search …
View link

The photo that Chuck posted on 4/9/06 as been moved to a new site:
http://tinyurl.com/5amjaq

Fabuloous vintage and modern photos of the beautiful Constantine Theater can be seen on the Roadside Oklahoma site,
http://www.roadsideoklahoma.com/node/588

This is what the neighborhood around the Constantine Theater looks like nowadays,
View link

Mr. Constantine went bankrupt in 1926, and his theater changed hands. This item is from the September 11, 1926, issue of Motion Picture News:

“Albert Jackson, one of the pioneer theatre men in Oklahoma, who sold his theatre in Pawhuska, ‘The Jackson,’ to A. B. Momand early in the year, has again entered the theatre business in Pawhuska, temporarily at least. Jackson was recently appointed receiver of the Constantine Theatre by the Bankruptcy Court, with the understanding that if the theatre becomes solvent, it will again revert to Mr. Constantine.”

The September 25 issue of the same journal had a follow-up item:

“F. B. Pickrel and his associates who own the Majestic, Murray and Mission theatres at Ponca City, have just purchased the Constantine Theatre at Pawhuska, from the bankruptcy court. This sale releases Albert Jackson, who was appointed receiver by the court a few weeks ago. Pickrel will have charge of the Constantine Theatre in addition to the three Ponca City ones.”

The October 7, 1927, issue of Motion Picture News refers to Fred Pickrel’s “Hi-he-kat” Theatre in Pawhuska. Pickrel probably renamed the house the Kihekah not long after buying it. Motion Picture News had ongoing difficulty with the theater’s new name. As late as April 20, 1929, they called it the “Ki-he-kak” Theatre.

The July 14, 1951 issue of Boxoffice reported that Video Independent Theatres had acquired full ownership of the Kihekah Theatre in Pawhuska, having purchased the half interest still held by Fred Pickrel, who had held an interest in the house since 1927. Video had acquired a half interest from Pickrel’s partner in 1950. Video Independent was still operating the Kihekah in 1963, when it was mentioned in the November 25 issue of Boxoffice.

Live performances were being presented at the Kihekah Theatre even before its name reverted to Constantine. A performance of the play “The Crucible” was mounted there in 1976, according to the June 27 issue of the Oklahoma City Daily Oklahoman.