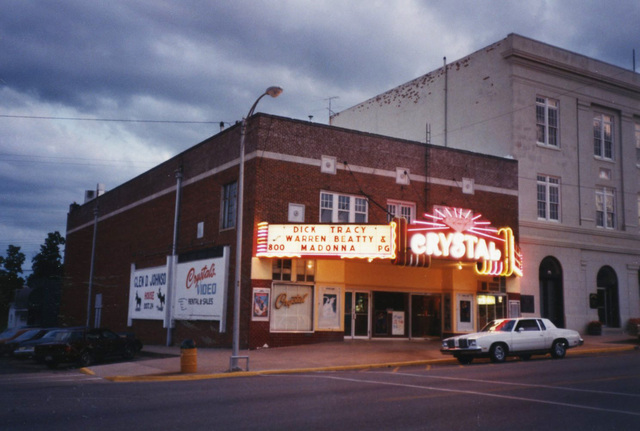 This historic Crystal Theater in Okemah has been around since 1921 (there had been a previous Crystal Theater operating since the 1910’s). It was remodeled in 1931 in an Atmospheric style and boasted a capacity for 700-seats.

It later hosted a variety of events, including first run movies, and live performances such as the Woody Guthrie Folk Festival. It was closed in 2020.

I am proud to announce that the Crystal Theatre is back open for business. We open tonight (4-20-12) at 7 p.m. with the movie starting at 7:30 p.m. Our feature is Mirror Mirror

In 1931 Anton (Pop) Slepka (1877-1956) purchased the theater. The theater was later managed by his son Bill Slepka. They also had the Jewel Theatre in Okemah.

Okemah is named for Chief Okemah. Born in Okemah 100 years ago on July 14, 1912 was famed folk-singer Woody Guthrie “THIS LAND IS YOUR LAND”. His son is Arlo Gurthie “RIDING ON THE CITY OF NEW ORLEANS.

CT can always use photos, new and old, inside and out, and more info.

I’m wondering what the parking situation for the theater is. We’ll be there this Wednesday evening to see Arlo Guthrie. Coming from Phoenix, AZ.

Okemah’s a very small town, Judy, but the theatre’s on the main drag, such as it is. There should be plenty of parking—on side streets if nothing else. You may have to park two or three blocks away, but otherwise, it shouldn’t be an issue.

In 1931 Anton (Pop) Slepkas (1877-1956), who also owned the Jewel Theater which is listed on CT, bought the theatre and it was remodeled and modeled after Tulsa’s Ritz Theatre, in the Atmospheric-style with floating clouds (with a “steropticon” cloud machine), twinkling stars, stained glass lights and cut-velvet upholstered seats. With a balcony and orchestra pit. It reopened in 1932. Much of the theatre’s orignal decor still remains, Painted stage flats and scenery, remnants of vaudeville days, are used in local pagents and plays. The 1921 hand-painted curtain, lights and original seats also remain. The dressing rooms remain as a yearbook for the theatre with signatures on the walls dating from the early 20s to the present. The Crystal is one of very few historical theatres left in State of Oklahoma.

Pop turned the managenent of the Crystal and Jewel over to his son Bill Slepka. Bill was once said to be the the youngest playhouse execuitive in the United States. Bill Slepka brought Hollywood to Okemah. In the 1930s Bill ran six shows a week, changing bills daily, vaudeville and pictures. He charged from 10 to 25 cents, which sometimes included dancing troupes and dramas. He added a CinemScope Screen in 1954. He retired in the 1970’s.

In the early 80s the Crystal was purchased by Mark Smyth. The theatre was in dire need of attention, which Smyth gave by painting, repairing and adding a PIPE ORGAN to the theatre. Anyone know what kind of pipe organ and what happebed to it?

In 1995, new owners Johnny and Kristy Lesly, added surround sound, new projection equipment and made needed repairs, taking care to restore the theatre leaving as many of the original characteristics of the building in place as possible.

The Crystal continued as a movie house and then into the the twenty-first century when it closed.

On May 11, 2010, The Community Improvement Association (CIA) signed an aggreement with Donnie Williamson to purchase the Crystal. Williamsom generously agreed to sell the theater for $55,000, well below the $125,000 appraisal Williamson obtained when he purchaed the Crystal. The CIA secured finacing that included an additional $15,000 to make repairs to the building in order for it to be used. The CIA is comprised of leaders from many civic groups in Okemah, such as the leaders from the Chamber of Commerce, Lions Club, Woody Guthrie Coalition, American Legion, History Center, City of Okemah, Okemah Schools and the Ministrial Alliance which meet once a month to discuss the activities that are ongoing in Okemah. The majority of groups represented on the board of the CIA made pledges to help with the cost of purchasing the Crystal Theatre. The CIA has taken the initiative to keep the Historic Crystal Theatre in good repair. The Crystal is home to many performers during the Woody Guthrie Celebration each July.

THE GOAL OF THE OKEMAH CIA FOR THE CRYSTAL THEATRE IS TO:

*PRESERVE A HISTORIC PART OF OKEMAH’S PAST.

*PROVIDE THE COMMUNITY WITH A MULTI USE FACILITY.

*PROVIDE A TOURISUM DESTINATION IN CONJUNCTION WITH THE WOODY GUTHRIE PARK AND HISTORY CENTER.

*SAVE THE CRYSTAL FOR GENERATIONS TO COME.

I just contacted the Okemah Chamber of Commerce. They report that it is closed and under new ownership. They’re not sure of any future plans for it.