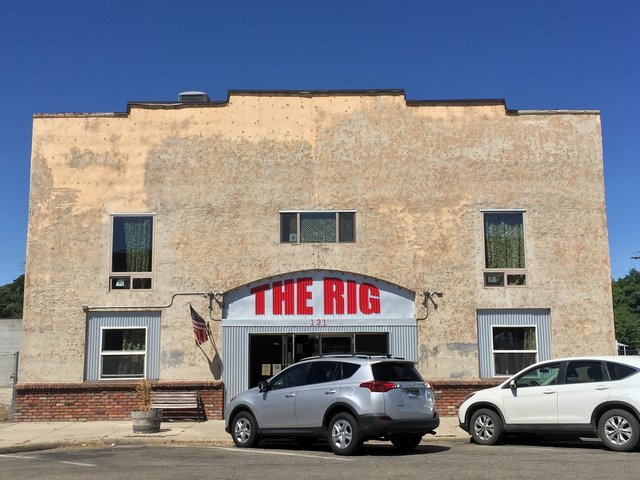 One of two movie houses in the downtown area of Emmett, located on S. Commercial Avenue (the other being the Ideal Theater), the Liberty Theater was opened on September 8, 1917 and could seat 450. It was closed in the 1950’s. It became a skating rink, and is now used as a gymnasium.

As I remember, the liberty stopped showing films back in the 50’s. Back then, it still had the large upright sign that spelled out LIBERTY and later it become a skating rink.

I was just there a few weeks ago and the building is now used as a gym. The interior is still totally open, as it must have been when it was a theatre. A number of structures used by the Gym have been built inside the shell.

The building has nothing that looks like it had a stage or fly loft.

I have pictures of the building, which I will post when this sites picture feature is working.

Both of Emmett’s theaters, the Ideal and the Liberty, were in operation by 1920. Volume 4 of “History of Idaho: The Gem of the Mountains” by James H. Hawley, which was published that year, said that the Ideal Theatre was owned by Claude D. Bucknam, who also owned a half interest in the Liberty Theatre.

The January 5, 1918, issue of The Moving Picture World reported that the Liberty Theatre was then under construction at Emmett, Idaho.

Our interface with Google Maps has some quirks. If there is an incomplete address for a theater when it is first posted, or if street names have been changed or the street has been realigned or closed, or we post the wrong zip code, Google appears to make its best guess as to where the theater actually was, and that sometimes puts the pin icon and street view miles from the theater’s actual location. If a full address is later added, for some reason it doesn’t always fix the map.

Here is an actual street view of the Delta Athletic Club in the former Liberty Theatre building.