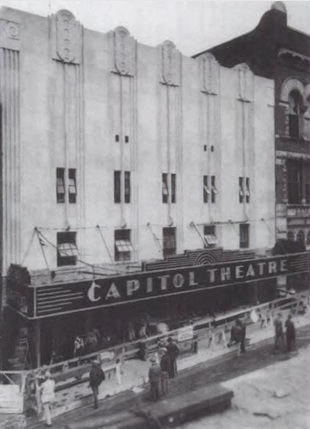 The Capitol Theatre was closed October 17, 1974 with Jack Nicholson in “Chinatown”. It was demolished in late-1983

The Capitol was opened in the early 1930’s. There is a sound, B&W film made of the Capitol’s opening with interviews of businesspeople and “acts” by some of the local talent. It’s a treasure if anyone would know where it is.

I remember it well. I left Clarksville in 1960. The Capitol was still going great!

I live very near where this used to be. I believe it is a jewelry store now. What a shame.

There is a photo of the Capitol Theatre on page 72 of Clarksville, by Liana Mitchell and Joel Wallace (Google Books preview.) The caption says that the theater in the photo opened in 1936, replacing the original Capitol Theatre which had opened across the street in 1928 and had been destroyed by a fire in 1935. A low, rather ugly red brick garage has replaced the handsome Art Deco theater building. 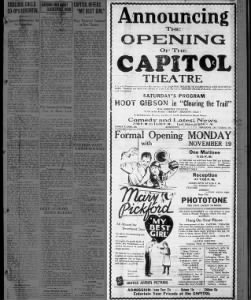 April 30, 1936 opening ad with “Small Town Girl” in photos. As noted above, the Capitol Theatre replaced the burned out previous Capitol across the street. Architectural plan was by Marr and Holman of Nashville with Joseph W. Holman. The theatre closed on October 17, 1974 with “Chinatown.” It was ostensibly replaced by the opening of the Martin Twin. The Capitol Theatre was razed after being vacant late in 1983.