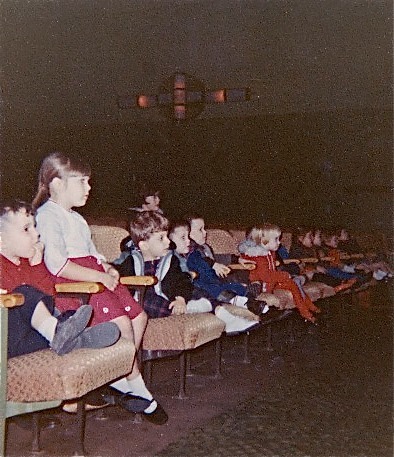 The Forty Fort Theatre was located at the corner of Dilley Street and Wyoming Avenue in the town of Forty Fort, PA and opened for the first time on January 29, 1938 with Judy Garland and Mickey Rooney in “Thoroughbreds Don’t Cry”. It was built by Thomas P. Alexander & Louis Marinos, in conjunction with Comerford Theatres. By 1943, it was operated by Paramount Pictures Inc. through their subsidiary Frank Walker.

It had 892 seats in its one floor auditorium and was known for mostly showing foreign and art type films during the latter years of its life. It operated until 1988 when the building was converted to professional offices.

This theater was a small “second run” theater. It showed movies after they finished their run in the larger Wilkes-Barre theaters—-the Comerford and the Paramount…I spent many Saturdays at the Forty Fort Theater in the late 50’s and 60’s. Kids' matinees were 15 cents on Saturday, and most items at the concession stand were 5 cents. If you bought a box of candy, when you finished, the box was used as a noisemaker….if you bought one of those flat boxes of pretzels, the box became a projectile. Of course, this silliness was not tolerated in the evening! I saw so many movies there….Bambi, BenHur, and The Birds. The owners were brothers, ..very nice men….they were always there and knew just about everyone by name. As time went by, kiddie matinees were forsaken for first dates as we entered our teens. I am sorry that the building was changed. Those were the days.

To Bobs…..The old photo of the Forty Forty Theater shows “Diamond Jubilee” on the marquee. That event was celebrated in 1962.

In the 1980s this theater was showing first-run pictures, the artsy ones that wouldn’t play at the mall. I saw Brazil, Under the Volcano, and Out of Africa here. Sometimes they had second-run, like Return of the Jedi, after it had played at the mall a few months.

Several posters mentioned photos but when I click on Photos there are none. Also the street view is for the wrong address completely, how can that be changed?

I remember going to the Forty Fort theater back in the mid 80s, I think. I was with my new girlfriend Nancy Dolan, who was from Forty Fort. I believe that we saw Terms Of Endearment. Although I could be wrong. The only thing I do remember was Nancy. I couldn’t take my eyes off of her. Wonderful time. Still can’t get her out of my mind.

Hola from Mexico. I lived in Forty Fort as a kid, in Colonial Gardens just a few blocks from the Forty Fort theatre. My friends and I spend most Saturday afternoons watching The Lone Ranger, The Durango Kid, The Cisco Kid – movies like that. Big nights out were spent at the Comerford and Paramount theatres on Public Square in nearby Wilkes-Barre, PA. Years later I was fortunate enough to be there the night the theatre shut its doors for the last time and to spend a few minutes with Mr. Alexander, one of the owners. If memory serves, the last show was Fatal Attraction.

This was the theater of my youth! It was located directly opposite the end our street and I saw my first movie here at the age of four in 1971 (a reissue of Walt Disney’s Pinocchio.) Walking up to the movies was a great treat and I have really fond memories of this place. Beautiful red seats and curtain (ALWAYS closed between shows) and wonderful art deco accents everywhere. I got permission from Tom Alexander to post some of his personal photos here, but many more can be found in the facebook group dedicated to the theater here:

I remember sitting in the back row of this theatre with the love of my life at that time…. Nancy Learn. The movie was called Summer Place and we never saw a second of it. We spent the whole time kissing one another. That became so special to us that we made the “Theme from a Summer Place"our song. That was in 1964. I’ve heard it on the radio about five times since then and think of her and that special time fondly!