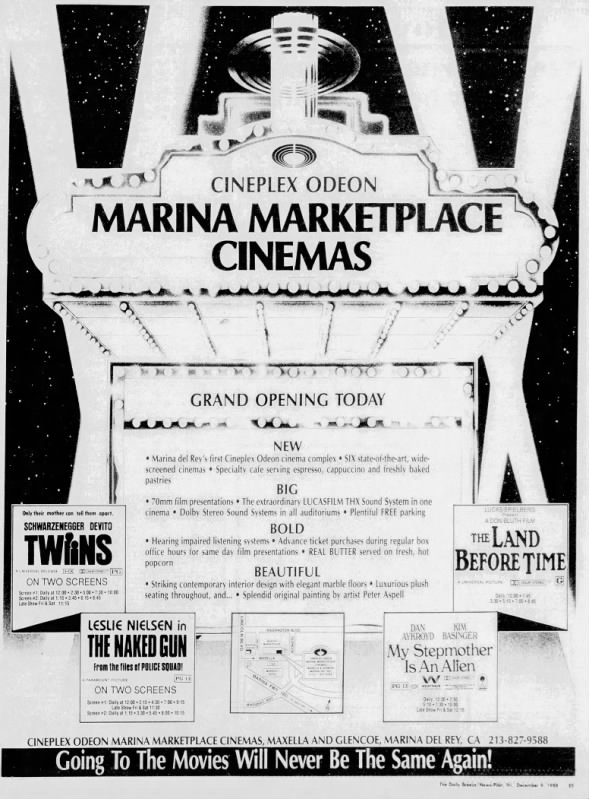 When I worked for Cineplex Odeon in 1991-1993, this was the seating for the Marina Marketplace 6:

With the Dine-In concept, the current seating is:

Don’t knock it till you try it, Brad. And it’s really not as intrusive as you think. The only “interuption” I had was the waitress (SILENTLY) placing the bill on the edge of my table midway through the screening.

I’m never going to be convinced this is a good thing. I hate interuptions and talking during films. IMO this will never replace Arclight as far as quality in film exhibition. Common…Really? If this is the future of Cinema then I am going to quit going. AMC is killing film exhibition. They are the worst.

Those are weekday prices, Danny. Don’t know the weekend matinee price, but weekend evenings jump up to $17.50.

The AMC website lists ticket prices as much cheaper than the LA Times article above — $10 matinee, $12.50 evening.

The room I was in (Auditorium 1) was happily side masking. :)

How was the masking Chris? :P

I think that if AMC builds more of these around LA, ArcLight will have it’s first real, legitimate competion in town!

An article about AMC’s converting this theater to its dine-and-view concept can be read here.

I don’t know about you, but a good steak paired with a good movie sounds like a great night.

I think people are figity enough watching a film without having the interputions of a waiter taking pates and filling glasses. Movies should be movies and restuarants should be resturants. I’m just a old grouch who wants a good film with a great presentation. No 3D! No food service! No taking and texting! Just a quiet well mannered audience to watch a film with.

Brad- you wouldn’t say that if you had been to an Alamo Drafthouse.

It condenses a night out at the movies. Combining the two allows people to go see the 7:00 show and be out by 9. Many people don’t want to stay out until 11 just to see a movie. So if it puts more butts in the seats then I’m all for it.

Also — if you don’t want to eat during a movie (or have others around you eating) don’t go to a dining theatre.

I do not understand the appeal of DINE-IN movies. Can’t we just have nice theatres with a nice presentation and comfy seats? What is the appeal oh having a steak brought to you while you are watching a film? There should be no distractions at all when watching a film. AMC is really a trashy theatre chain. They are wrecking film exhibition.

Edward Havens: which Cineplex did you work at? I had the dubious honor of doing much of the training of managers and assistant managers at the Marina, under the direcion of then District Manager Larry Oya, and Local 150 IATSE Business Manager Ralph Kemp. The 1992 contract between Cineplex and Local 150 was essentially a “phase out” contract: we got 5 years of security in exchange for losing about half of our union operator jobs, including Meredith Rhule’s at the Marina.

The seat capacity for the complex was 1850.

Edward Havens, sorry, but I was fired in 91 by Loews. Garth Drabinsky was in trouble, and the projectionist were reduced from 14 to five shifts per week. Bob Seeling had senority and got to stay. It could have been that Loews was just managing for Cineplex. Who knows??? Who cares???

Wow Ken, my baby still looks nice to me. Thanks for the photos Ken!

The Chinese restaurant next to theater has closed, along with a couple more stores on the second floor. The tbeater was empty at four in the afternoon today.

Granted, I spent less than two years with Cineplex, from July 1991 to June 1993, but I’d like to correct some of Ms. Rhule’s errors above. The Loews/Cineplex merger happened in 1998, not 1991. In 1992, Cineplex did threaten to lock out the union projectionists, and many of the Cineplex assistant and general managers were sent to the Marina Marketplace to train as projectionists should the lockout occur. I had run my own booths during my four years at United Artists (1986-1990), so I ended up helping out with the teaching, but the lockout thankfully never materialized. Of all the years I have worked in exhibition (23 years and counting), the two years at Cineplex were the only time I have ever had union projectionists, and I was damn glad to have them.

As for the theatre itself, it was a minor version of the Universal City complex, which had opened the year earlier. A nice theatre, overall, and one I continued to enjoy attending even after I left Cineplex. I love that it has those huge windows in the lobby to let in natural light… although I am certain they can be a distraction to the concessionists who have to work near them when the sun is setting. I haven’t been there in a good 14 or 15 years, but it looks like it held up well.