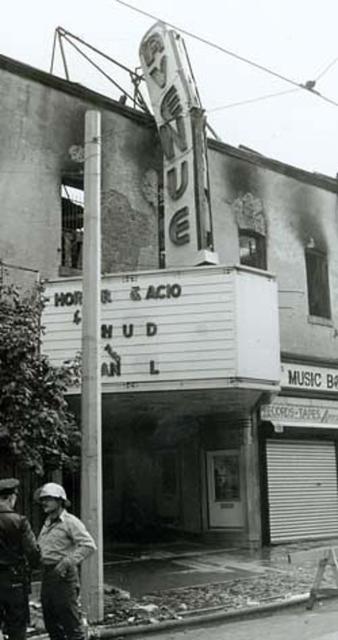 Operated by David E. Milgram, the Elmer became the Avenue Theatre on March 27, 1932. As a neighborhood theatre, the Avenue showed ‘last run’ movies, after they played at the Uptown Theatre on North Broad Street.

On Sunday, October 7, 1984, the fire alarm sounded at 9:11PM. 90 moviegoers exited. They had been watching a double feature of “C.H.U.D.” and “Angel”. The Fire Department reported the fire was arson, begun in a first floor variety store, and took three hours to put out. The three alarm fire damaged the Avenue. Theatre owner William Milgram, son of the 1932 owner, was upset at the loss of the theatre. Admission before it closed was $2.50 for adults, $1.25 for children. Until its closing, the Avenue Theatre showed Saturday ‘kiddie matinees’ of cartoons and movies.

The Avenue was the last movie theatre then operating in North Philadelphia. Except for a brief reopening for movies of the Uptown in the early 1990’s, the next movie theatre to open was the seven screen Pearl on North Broad Street in 2006.

Contributed by RickB, Howard B. Haas
Get Movie Tickets & Showtimes

Ads for the Avenue in the JFK assassination newspapers say that it was scheduled to reopen the following Wednesday (November 27, 1963) after a renovation. That might explain the idea that it closed in the Sixties (it could have been missing from listings while the work was underway), although 1964 would still be the wrong year.

I remember this theater being one of the first movie theaters I ever attended as a child. I remeber seeing Pinocchio there and being absolutely terrified of the coming attractions for “Whatever Happenned To Baby Jane”. At the time admission was 25 cents for children under 12 and if you were an adult or over 12 years of age admission was 35 cents. I still remember the theater closing down for renovations. I never got a chance to visit the theater after it re-opened. I do remember that the outside got a real nice face lift with lots and lots of bright new neon. Last summer I deceided to drive down to where it stood and all that was there was an empty lot.
I was unaware that it burnt down in the 80’s.

Here is a photo, circa late sixties:
http://tinyurl.com/2dayx3

I’ve been pretty close. Missed that one, though.

Here is an item from Boxoffice magazine, October 1947:

PHILADELPHIA-About 650 patrons of a north side theater filed out in orderly fashion when a basement oil burner backfired, filling the auditorium with smoke. It took about five minutes to evacuate the Temple Theater while the projectionist played music over the sound track amplifiers.

Manager Charles Thompson, three ushers and a policeman helped to guide the people to the street through the main doors and emergency exits shortly before 9 p.m., before the last show got underway.

After noticing the smoke Benjamin Horowitz, projectionist, immediately switched off the picture, turned on the lights and started the music. Leroy Dreisback, head usher, leaped on the stage and started the evacuation. Virginia Kuntz, cashier, locked her booth and notified the policeman on the beat, who called firemen.

A small Family Dollar store has been built on the former theater’s location.

This was my Saturday Matinee movie when I was a kid. Scrubbed the neighbor’s white steps for a nickel. Added my nickel allowance and I had enough to get into the show. If Friday night company had lost change in the sofa cushions, I had enough for popcorn and a Klein Lunch Bar! Good times.

As a child we spent many Saturday afternoons at this theatre as well as the Keystone. It was the best place to cool off in the summer, it was air conditioned.