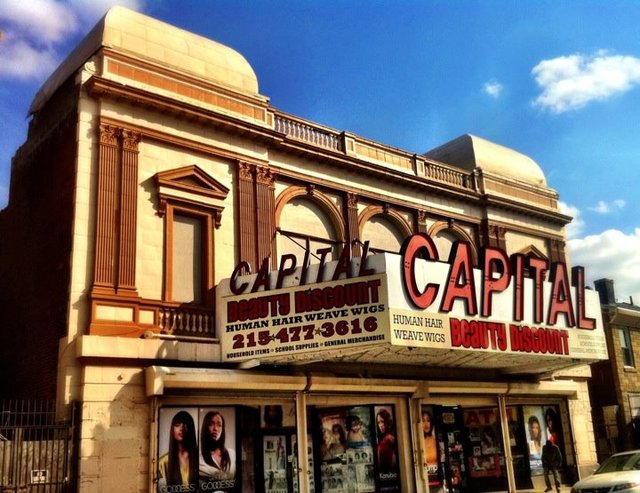 One of Philadelphia’s last neighborhood theatres, the Apollo Theatre was opened on December 26, 1913, it was entirely redecorated in October 1915, reopening as the New Apollo Theatre. In 1917 it was equipped with a Kimball organ. It was closed on April 3, 1960 with Burt Lancaster in “From Here to Eternity” & Humphrey Bogart in “Sabrina”.

It reopened as the Capital Theatre on May 23, 1961 with Lee Remick in “Sanctuary” & Burt Lancaster in “The Unforgiven”. It managed to snag a few first-run bookings in its final years and closed on June 21, 1992 with Christopher Reid in “Class Act”. Real estate records currently show the building as retail space, known as Song’s Capitol Discount Store.

Although I’ve never been to the Capital Theatre and the only thing I know about Mr. Klieman was what appeared in his obituary, I was aware that the area around where it was located was impoverished as I used to pass through it en route to Overbrook by way of the Market Street El and then some local bus at 52nd Street I used to take, my traveling originally from Northeast Philadelphia — which, of course, had its own abundance of local theaters at the time. And let me just say there’s no shame at all to poverty, only shame to those who impose it — most particularly those who amass wealth as a result of doing this. And Mr. Klieman’s obituary just didn’t strike me like he was that kind of guy, which is why I presumed you were putting us all on when you posted what you did. For seriously, how is a series of exploitational Kung Fu movies supposed to turn life around for the better in the ghetto? With Mr. Klieman’s association with Coretta Scott King — the widow of a man most noteworthy for his non-violence stance — he had to know firsthand that the exhibition of violent movies in ghetto theaters was in no way helpful to the ghettos' dwellers. So if he did exhibit a long rash of violent Kung Fu movies at his Capital Theatre as you say, he knew exactly what he was doing in terms of something to be greatly ashamed of. And here you are singing praises of the guy and the movies he subjected you to while growing up. That’s why I had to assume you were putting us all on. Either that, or the obituary got it all wrong. For this is America, and there’s no excuse why anyone should have to be poor. And by that I’m not condemning those who are poor, only those who derive their wealth by making them so. And we’ve had way too much of that now. The time has come for those who make their wealth in that way to pack it in and to give back every last thing they’ve wrongfully acquired. If Dr. King were here today he would announce that that way over-extended run has expired and the bill has just come due. And the longer that bill isn’t paid the worse it’s going to be. So it’s best to pay up now.

As for Kung Fu itself, it was an ancient art of self-defense developed by Bhuddist monks for when traveling through hostile territory, and it was far from anything they were proud of. And they would’ve been horrified that anyone would’ve seen it as a source of “entertainment.” You, growing up in the ghetto, might not have known that, but given Mr. Klieman’s background he had to. So what you’re ultimately telling us all here is that the obituary got it all wrong. And if what your telling us is true I sure wouldn’t want to be where Mr. Klieman is now.

some of my memories include going to the Capital on the weekend during the summer. My brother and i used to take the 15 trolley to 52nd and Girard Ave. I remember one easter me and my friends all went to see Friday 13th Jason Lives when it first came out. We came in late..unlike now a days when u had to wait until the theater was cleaned. Anyway, we watched the end of the movie then watched the second movie Rush i think. Then we watched the main film again until the part that we saw. As a teen it didn’t matter much to me about the cleanliness and the fact it was one screen. All i cared about was the movie on the big screen. We would then proceed to spend all of our money on video games at the corner store.

That was the beauty of growing up in West Philly during the late ‘60s thru mid '70s — The Capital. It was “the place to be” for good movies especially if you didn’t want to travel to Center City. I lived one block away on 53rd & Thompson. The big neon “CAPITAL,” the unusual zigzag auditorium, the wondrous curtains, the popcorn, the cheesy Kung Fu flicks (Enter The Dragon!) Yeah, sweet memories!

My mom and I were there one day in the early ‘70s and my neighbor had to buy a ticket just to come get us because our washer overflowed and water seeped over into their house. The last movie I saw there was “Scarface” in '84.

The Apollo can be seen on the left in this 1956 photo:
http://tinyurl.com/oxwdn4

Can someone please tell me what was the last movie that played at the Capital? My family and i have been disputing this for years now!

DEMISE OF CAPITAL MARKS END OF AN ERA

The Capital Theater in West Philadelphia – the last surviving soldier in a battle between city neighborhood theaters and the big chains – has closed. Unless beleaguered owner Paul Klieman can arrange new business terms with the major movie distributors, the landmark theater at 1237 N. 52nd will have shown its last feature, “Class Act.” If the Capital remains closed – and Klieman said he is not hopeful of recovery – Philadelphia will have said goodbye to an era of…

Here is a circa 1960s photo from the Irvin Glazer collection:
http://tinyurl.com/pkq5hq

Here is a good view of the theater building:
http://tinyurl.com/y878n7j

I am looking for the trailer prevues they use to play just before the martial arts trailer in the 80s…..

Charles Segall opened the New Apollo Theatre in October of 1915. It had a 45 year run under that name closing on April 3, 1960 with “For Here to Eternity” and “Sabrina.” The theatre was overhauled under new owner, Paul Klieman, becoming the Capital Theatre with a preview opening on May 23, 1961 and grand public opening the next night both with “Sanctuary” and “The Unforgiven.” Klieman defied the odds operating the aged movie house as an independent, single-screen operation for 31 years. It closed June 21, 1992 with “Class Act.” It was retrofitted for other retail purposes.