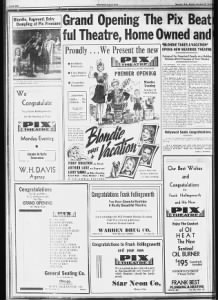 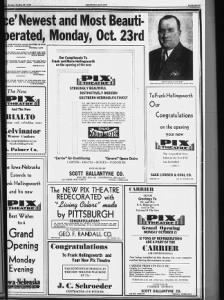 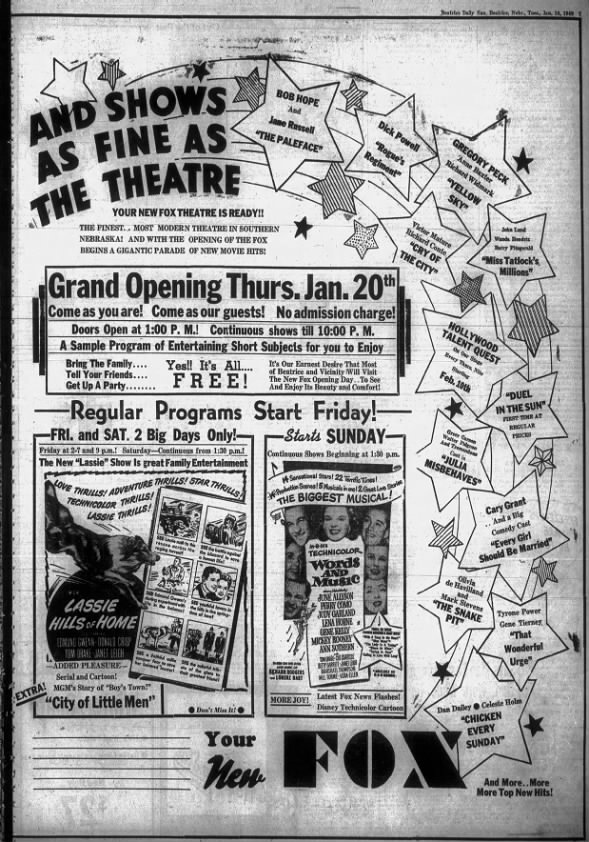 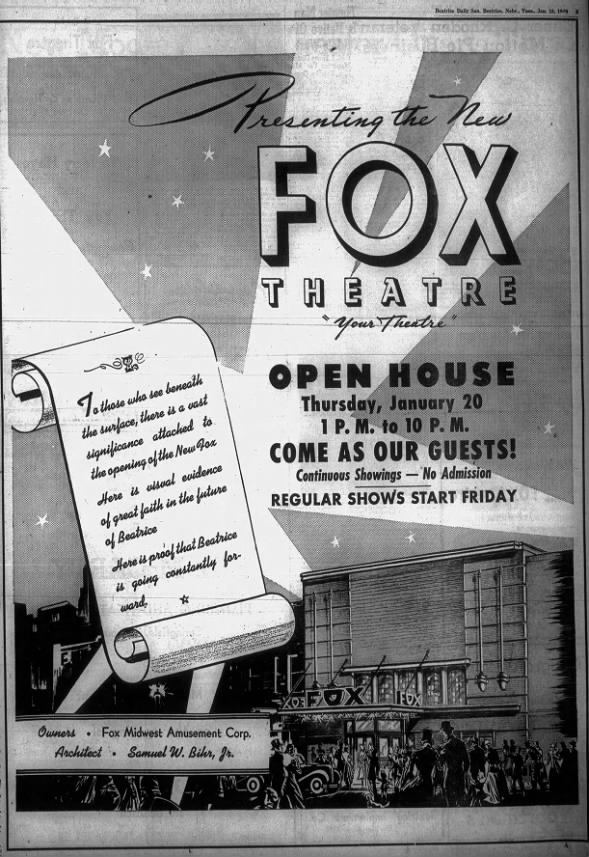 A survey of historic buildings in Beatrice (pdf here) confirms that the Cinema Centre is the same house that opened in 1928 as the Ritz Theatre.

The May 3, 1928, issue of the Beatrice Daily Sun said that the Ritz Theatre would open the following day. The new house would feature a Hillgreen-Lane pipe organ and Spanish decor. The house had an orchestra pit and a stage, and presented vaudeville acts as well as movies vaudeville. The Ritz was operated by United Theatres for less than two years. In 1930, the February 26 issue of The Film Daily reported that the house had been transferred to Fox Theatres, and by April had been renamed the Fox.

Hollingsworth had intended to operate the Pix as a first-run house, but had difficulty obtaining product. A June 18, 1941, Daily Sun article said that the house had operated only intermittently since being reopened. I haven’t found it listed in the paper later than February, 1942. Hollingsworth eventually filed a lawsuit against Fox and won.

In 1948, the Fox circuit reacquired the long-vacant theater and had it largely rebuilt. As the rebuilt Fox had the same footprint as the original Ritz, the increase in seating capacity from less than 600 to more than 800 was probably accomplished either by raising the roof and installing a balcony, a feature the house had never had before, or by removing the stage and expanding the seating into that area. The expanded Fox Theatre opened on January 20, 1949. By August, 1971, the house had been twinned and was operating as the Cinema Center.

The November 16, 1929, issue of Movie Age says “Fox Film Corporation has taken over the Ritz Theatre at Beatrice, Nebr.” That increases the likelihood that the Ritz became the Fox. If it did, there’s also a chance that it was the same theater which is now the Cinema Centre. Read on for details.

The June 5, 1948, issue of Boxoffice has an item headlined “To Rebuild in Beatrice” saying “Fox Midwest will rebuild an old local theatre building, long closed, into the modern 900-seat Fox Theatre. The project, to be completed by the end of the year, will replace the 900-seat Rivoli, now operated by FMW.” Fox might have dropped the Rivoli, but I’ve seen mentions of it in later issues of Boxoffice, so if they did then somebody else must have reopened it.

A November 9, 1964, article published by Boxoffice on the occasion of Frank Hollingswoth’s retirement, had this to say: “…he started his theatre business on April 12, 1933, with the Rialto…. Eight years later he built the Holly. At one time he also owned the Pix Theatre, now the Fox.” (Oh, and I mistakenly put has name as Earl Hollingsworth in my comment yesterday. It was Frank.)

Now it gets a bit twisty. Under the headline “F. Hollingsworth Opens Second Beatrice House,” the November 8, 1939, issue of Boxoffice says: “Frank Hollingsworth, who has been a one-house operator in Beatrice for some time, has opened his new Pix Theatre. It is a first-run spot, renamed from the old Fox. Hollingsworth took it over when Fox Midwest let it go recently in a rental squabble. He will continue to operate the Rialto as a subsequent runner.”

Hollingsworth must have had friends at Boxoffice (or Fox had enemies), as their December 9, 1939, issue published a multi-page article about his new house, with several photos and with the title “The Little Pix Theatre Puts Its Predecessor to Shame.” Take that, Fox! Hollingsworth had re-seated the house, redecorated, put in acoustical treatment to improve sound, modernized the facade, and installed air conditioning. But the 1948 rebuilding when the Pix became the Fox again must have been quite extreme, as the Fox had 900 seats and the Pix only 525.

So it looks as though the Cinema Center also has Pix as an aka, and was the Fox until 1939, and then was the Fox again from 1948 on. It might also have been the Ritz, but I haven’t found any solid confirmation of that yet.

Hollingsworth apparently closed the Pix some time in 1940, when he couldn’t get first-run pictures for the house. He filed a lawsuit against the Fox Beatrice division of Fox Midwest Theatres, and in 1942 a jury awarded him damages for his 1940 losses, and he and Fox then settled out of court for his 1941 damage claims. I haven’t been able to find a final closing date for the Pix, but as he opened the Victory (later renamed the Holly) in 1941, perhaps the Pix remained closed until Fox re-acquired it in 1948.

Lots of items about Beatrice show up in Boxoffice Magazine and its predecessors, but there are some contradictions and complications among them, so it’s hard to figure out which theaters had which names when. For example, there might have been two theaters called the Fox, the second of which was a 1948 rebuild of an older house- or maybe just a rebuild of the first Fox. The article is imprecise. Does anybody know if the Fox changed addresses about 1948?

One interesting item is an ad for Boller Brothers in the July 10, 1926, issue of The Reel Journal, which lists a Beatrice Theatre in Beatrice, Nebraska, as one of their projects under construction, though it says that Boller Brothers were only consulting architects on that project. I’ve found a few references to a Fox Beatrice Theatre. I wonder if they were the same house?

The Reel Journal of September 19, 1925, lists the Gillbert Theatre in Beatrice as being among the houses which has installed a Reproducto Player Pipe Organ (which sold for $2,150, installed.)

An item in Movie Age, February 9, 1929, said that the Ritz Theatre in Beatrice had installed Dramaphone sound equipment. Boxoffice of June 5, 1948, included a mention of the Ritz opening recently in its “From the Boxoffice Files, Twenty Years Ago” feature.

Another interesting item is in the October 19, 1929, issue of Movie Age, which said that Publix had bought four theaters in Beatrice- the Rivoli, Strand, Palm, and Ken. There are mentions of the Rivoli into the 1940s, but I’ve found no more about the other three so far.

There was also a Pix or New Pix Theatre, under operation in 1940 by Earl Hollingsworth, who was also operating the Rialto at that time.

There’s some other stuff about Hollingsworth’s theaters, but different issues give contradictory information which will have to be sorted out.

The Cinema Centre (Fox) Twin Theatre is across the street from the Holly Theatre. They are two different buildings. It should have it’s own listing.

The Fox was part of the Fox Mountain-Midwest Theater chain in the 1960s.