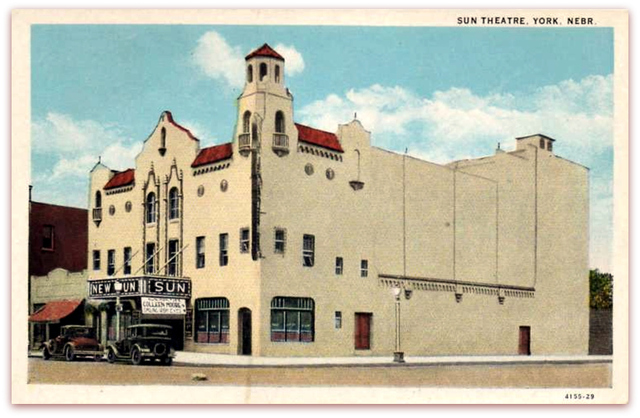 The Spanish Colonial style New Sun Theatre on N. Lincoln Avenue near 4th Street was opened in 1929, replacing an earlier Sun Theatre which had been destroyed by fire. It was originally opened with seating for 1,000 in its single screen. It was later renamed Sun Theatre.

It was converted into a triple screen theatre in 1991.

This small photo is all I’ve come across so far. If anyone finds a larger picture, please add it to the page:
http://tinyurl.com/23uqu4

That’s interesting. The first photo is estimated to be from the late 70s. They don’t even look like the same building.

Chuck’s photo shows that the photo ken mc linked to and the photo CinemaTour has both depict the same theater. The Cinematour photo must be the most recent, and the front of the building was remodeled after the other two were taken- probably at the time the three-plex conversion was done in 1991. That corner tower is a dead giveaway, though. It’s clearly the same building in all three photos. It’s too bad they stripped off all that nice Spanish Colonial detailing.

From York a postcard image of the Sun Theatre.

The Sun Theatre is mentioned in a 1926 advertisement for Reproduco Organs. Reproducos were fairly modest instruments, and all (to my knowledge) were equipped with roll players – a useful option in a place where there might not be a musician always on hand who could credibly play during a silent movie.

That would be Harry Meginnis and Edward G. Schaumberg (firm’s mini-bio.)