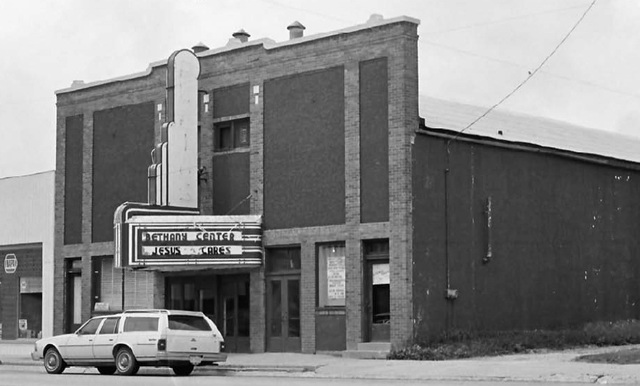 Originally built as the Gourley Opera House, on August 21, 1914 it was renamed Star Theatre. In 1915 it became a full-time movie theatre. On July 1, 1919 it was renamed Essaness Theatre. This historic building on E. 2nd Street was renamed Plains Theatre on May 9, 1938. It later served as a church for a time after the theatre closed. Since 2001, the restored theatre has been home to the Sheridan County Players, which presents legitimate theatre and musicals on the Plains' stage.

The Plains Theatre was added to the National Register of Historic Places in 1988.

I have read the guidelines for posting here so I will do all I can to stay away from nostalgia, but it is tough. Can one fall in love with a certain place, a certain building, in a certain location. Oh yes I believe it is so easy for some of us to do just that. The place where you meant your first girlfriend, and in my case it was back during the days that just sitting by that certain someone was special. If you got your arm around her that was a little bit of heaven. The Plains Theater served the community in so many different ways. A dance hall down below, a stage for several shows that came through Rushville, a skating rink, and possibly more then that, just can’t remember it all. Oh yes and it was a church for many people for a long time, and then a place for local people to come and try out their acting talents. It just doesn’t get much better then that. I would like to leave as much as I can here for posterity, as this Opera House was so much to so many people. It is my sincere hope that others will come on here to bring this wonderful back to life again.

Oh I don’t neither, just being careful about off topic discussions. It would be easy to do that here. Yes the lights have been removed, and I doubt if they were kept, however knowing the people who tried to preserve this building they could be stored somewhere. I am sure you are correct about the lights. I have passed this to a couple others, in hopes they will add to what has been said here. I have to chuckle a bit about the standards we set today as far as the load capacity of the theater. By todays standards the capacity would have been sit, back then they were practically hanging from the rafters, especially when a stage show was on tap. Life was a little more simple back then, and going to the Saturday afternoon matinee was a big thing for us kids. A dollar certainly went a long way. Another thing that was normal but a big violation now days were the lack of bathrooms downstairs for the dances. The women would go across the street in the alley, and the men out the side door to another alley, which separated the opera house from the Methodist Church next door.

The July 2, 1938, issue of The Film Daily had this item about the modernization of the Essaness Theatre:

“Denver — William Barnes, who also publishes the newspaper at Rushville, Neb., has bought the Essaness Theater there, and as a part of his remodeling job has ordered from the National Theater Supply Co. two new Simplex Acme sound projectors, a Walker White sound screen, new carpet and padding as well as new Ezy rug mats.”Another item in the same issue noted the name change to Plains Theatre:

“The Esseness Theater at Rush- ville, Neb., has been changed to the Plains, and has been taken over by William Barnes from John C. Gates.”

Joe just happened to come back to this web site today to see what is new. Thank you so much for the article that you just put on here, and really strange I would come back just a few days later to see it. I don’t get on here often. I wish others could see this that could contribute. Since I always knew the Plains as an Opera House and not just a theater I took the time to look it up. It is listed with the Nebraska State Historical Society.

I knew Bill Barnes and was always appreciative of what he did for the city of Rushville. His grandson became the editor of the Omaha World Herald for several years and is now retired in Sidney, Nebraska.

ronkukal: I was actually researching a theater in Rushville, Missouri, and came across that item, as well as items from Rushville, Indiana and Rushville, Illinois, all three of which had theaters called the Princess (Ohio and New York also have Rushvilles, but neither of them had a Princess Theatre.)

The earliest mentions of the Essaness Theatre that I’ve found are in various issues of Exhibitors Herald in 1920, when operator T. C. Shipley frequently sent the magazine capsule reviews of movies he had shown. Later, there is an item datelined Rushville, Neb., in the July 16, 1926, issue of The Film Daily which says “Francis McFarland and Charles Evans are new owners of the Essaness.”

I’ve also come across this web page which has several photos showing the Gourley Opera House and, a bit father down, the Plains Theatre in 1949. It looks as though an entirely new front was put on the building in the 1938 remodeling, along with the first marquee it ever had.

I will look this over and thanks. Trying to get a few more people from the Rushville area interested in this.

Feel like I am talking to myself on this site. So many things to say, and so many memories. Share with who? There just isn’t anybody.

This theater may become the location for a new live play written by Candice Johnson called, “Enemies Within”. We are all hopeful this will transpire next summer. At my age of 75 pushing 76, I am hoping to just be here to see it. This play will be based upon the movie script, so will actually have myself, and two other men who served on the USS Liberty as a part of it all. Looking forward to that event.

July 1, 1919 was a momentous day in Rushville, Nebraska, as it was the first day of Prohibition in the United States and it was the day that new operators, the Shipleys, took over the Star Theatre and changed it to the EssAnEss Theatre or Essaness Theatre playing upon their surnames “S and S.” The theatre converted to sound films in 1929 to remain viable.

Two owners later, on May 9, 1938, the theatre became the Plains Theatre showing Warner Baxter in “Vogues of 1938” supported by the comedy short, “Ask Uncle Sol” with Eddie Lambert. 100 years later the venue was still operating.