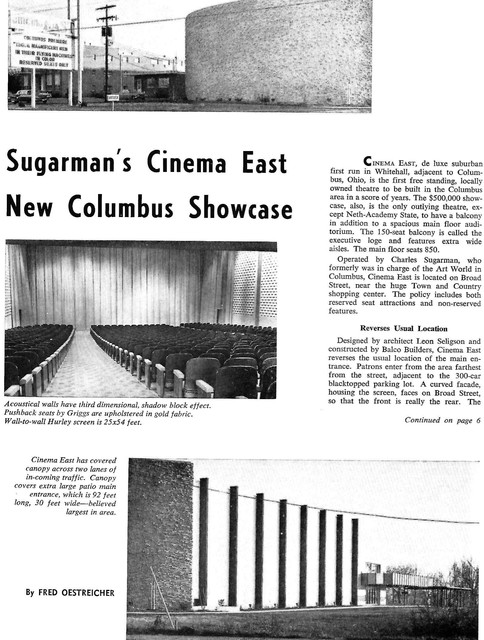 A large single screen theatre in the Columbus suburb of Whitehall, just east of the Town & Country Shopping Center.

It opened in 1965 with “Lord Jim” and ran its last movie, “Harlem Nights”, on Sunday, January 7, 1990. In its heydey, it was a favorite venue for 70mm screenings of big-event movies such as “The Empire Strikes Back”, “Indiana Jones and the Temple of Doom”, and “Alien”.

A Social Security district office is now located at this address.

DennisBee, our paths have crossed, I see. I also was at the STUNT MAN screening. They actually opened the balcony that night, so I got to sit up there for the screening of 10 that followed STUNT MAN. Great view from there. I remember looking up at the booth and seeing operators paying VERY close attention to the screen. Best thing I saw there was the 30fps screening of OKLAHOMA earlier in the 80’s.

Cool, Mark L. I stayed for 10 also—never passed up the chance for a double feature. I forgot—I also had my first screening of 2001: A SPACE ODYSSEY at Cinema East, in a reissue in the fall of 1971. Not the severely curved Cinerama screen experience I would have had at the film’s first-run at the Grand downtown in 1968, but close. My virgin 2001 voyage was followed a few weeks later by another MGM re-release (part of the same package): DOCTOR ZHIVAGO—also my first time. I saw that again around 1990 at the Ohio Theater Summer Movies and it didn’t look as clear and vivid.

I believe I saw Indiana Jones and the Last Crusade in 70MM here. My dad grew up in Columbus and knew the theater well so when we moved to Columbus in 1989 that’s where he took me to see my first movie as a Columbus resident. I remember driving by the theater shortly after it closed and not understanding why it closed because I had a blast.

Leon Seligson of Columbus, OH was the architect. Land was owned by Leon Schottenstein. Proposed building cost was $500,000.

The Boxoffice article Tinseltoes linked to confirms Leon Seligson as architect of the Cinema East, as does his entry in the 1970 edition of the AIA’s American Architects Directory. Seligson also designed the Kon-Tiki Theatre in Trotwood, Ohio.

A wonderful theater; I saw many films there. Some were giant Hollywood blockbusters, while some were just strange things to be playing on such a majestic screen, like the Columbus premiere of Fred Williamson’s cheesy “The Messenger”, with Williamson in attendance, and “Troma’s War”. Have fond memories of seeing “Monty Python’s Meaning of Life” there, too.

Last time I was at this theater was for “Beverly Hills Cop 2”, which my wife and I were finding unbearable. Luckily for us (not for the theater) lightning struck and the speakers exploded with the loudest sound I’ve ever heard, then silence. Everyone got a comp ticket to come back but as I recall, the place closed before we ever happened to go back.

Here’s a question for John Sittig if he ever happens this way. Charles Sugarman had Todd-AO projectors installed in the Main theatre in the early ‘60’s. I’m wondering if those projectors were moved to Cinema East when that opened? I don’t believe the Main ran any 70mm after 1962.

Hello everyone. CINEMA EAST was the best theater in town when I was a kid. One HUGE screen. Grew up in Reyoldsburg and Pataskala. I can clearly recall 10 year old me seeing JAWS (1975) and being scared to death, but my 6 and 5 year old brothers loving the film. Saw SUPERMAN (1978) and ALIEN (1979) there. My friends and I saw THE WIZ (1978) and GREASE (1978) at CE multiple times. One thing my friends and I remember well was this Lynyrd Skynyrd short film which played before some of the films.

“Superman” didn’t play at Cinema East (not first-run, anyway). There’s a listing of the first-run theaters where it played in this retrospective article I put together a couple of years ago. Scroll down to the Ohio section. I hope the article brings back wonderful memories of seeing “Superman” when it was new.

The 70mm Norelco projectors at Cinema East were brand new when the theatre opened. they were bought and installed by john Kenny from Ringold Theatre Equipment in Detroit. Second film to open at Cinema East was MAGNIFICENT MEN IN THEIR FLYING MACHINES in 70mm Todd-AO. Other memorable opening were Planet of the Apes, Jaws, Magnum Force and Jesus Christ Superstar where we made burlap robes for the employees to wear. I was the manager for 1973 to 1975 when Charlie Sugarman opened Cinema North. Wonderful showman and a great theatre.