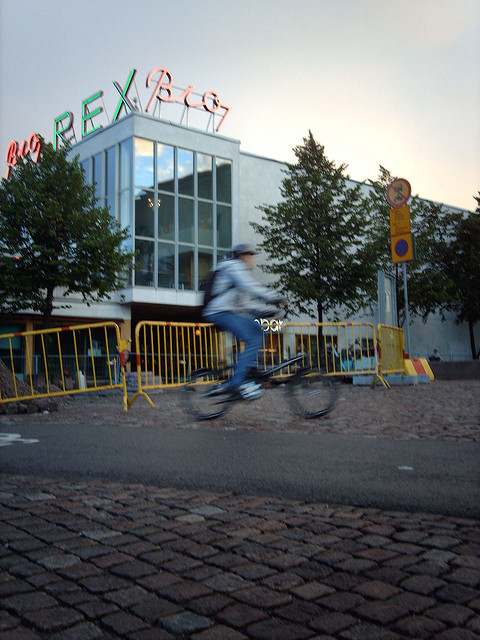 The Bio Rex is now part of the Lasipalatsi Film and Media Centre and is owned by the City of Helsinki. Seating is provided for 600 on one level, with private boxes located at the rear, each of which has its own sound system. It has been refurbished and re-opened in January 2000

The architectural firm of Kokko, Revell and Riihimaki were responsible for the original design, attributed to architect’s Viljo Revell, Niilo Kokko and Heimo Riihimaki. The Bio Rex opened in February 1936 with a premiere of the fim :Mustia Ruusuja" (Black Roses).

The building is considered to be a landmark work of modern architecture in Finland. It underwent another renovation, which was completed in 2007.

An interior auditorium photo can be seen here:
View link

What a fantastic looking place. Must great seeing movies here in big auditorium.

Came across the following series of photos on Flickr, regarding cinemas in Helsinki. According to Miemo “The exhibition Kinostalgia is a nostalgic tribute to the old cinemas – the Holga-photographs were taken in fall 2006 in four of the oldest remaining movie theaters of Helsinki: Bio Rex, Orion, Maxim and Forum.In 1960 there were 49 movie theaters in Helsinki. In 2006 there are only 8 left.”

This is one of the series

And some more history:

===
The Bio Rex cinema was opened in February 1936. The main door to the cinema is situated under an illuminated curved concrete awning and leads to an entrance hall containing the box office and a broad staircase leading up to the first floor foyer. The foyer, with its large windows, afforded access both to the cinema auditorium and to the restaurant and terrace. A spiral staircase also led up to the curved cinema gallery.

“Even an ordinary layman is delighted at the appearance and comfort of the cinema: its entrance hall has a high ceiling and is delightfully spacious and well-lit. A broad, well-appointed staircase leads to the hall itself, which welcomes the visitor with its beautiful colour scheme and peaceful ambience. ”

Ordinary Helsinki residents read in their daily paper about the special guest opening night of the cinema. The invited guests were given a guided tour of the new cinema and treated to a programme including the music of Sibelius performed by the cinema orchestra. The event culminated in the premiere of the film “Mustia Ruusuja” [black Roses], which was damned by the critics, while the new cinema, on the other hand, was greatly appreciated.

Although the Bio Rex was only the second largest cinema in Helsinki at the time of its opening, it was indisputably the most modern. All of the very latest technological advances were exploited: “The sound equipment of the cinema is based on the Western Electric Wide Range system”, and with a view to favourable acoustics, the walls of the auditorium were cladded with Austrian Heraklith tiles made of wood-wool. This was a novelty for the 1930s and was valued for its fire-resistant, sound damping and thermal insulation qualities – and also because it repelled lice! Acoustic demands were still a relative novelty in cinemas, as talking pictures had arrived in Finland only in the early 1930s.

This “cinema of first class and partially brilliant design and construction ” was blessed with “a uniquely modern ventilation system encompassing heating, humidifying and cooling equipment ” in which “the air is cleaned four times an hour in machinery in the cellar of the building”. The clean air was blown into the auditorium at the level of the ceiling lights and stale air was sucked out through ducts at the bottom of the seating stand. The ventilation room is located on the ground floor. The designs of the Stuttgart firm Lufttechnische GmbH were used in the planning of the Bio Rex ventilation system.

One of the high points for the new cinema undoubtedly occurred in 1938, when the prospect of getting the 1940 Olympic Games organised in Finland inspired the extension of an invitation to Leni Riefenstahl to visit the country. Riefenstahl’s film of the 1936 Berlin Olympics “A Festival of Nations” was shown to the guest of honour at the Bio Rex. It is said that Riefenstahl was given a standing ovation, not merely during the presentation but also afterwards, and that the applause continued and followed her all the way out of the building and into the street. The second part of the film: “A Festival of Beauty” was likewise shown at the Bio Rex.