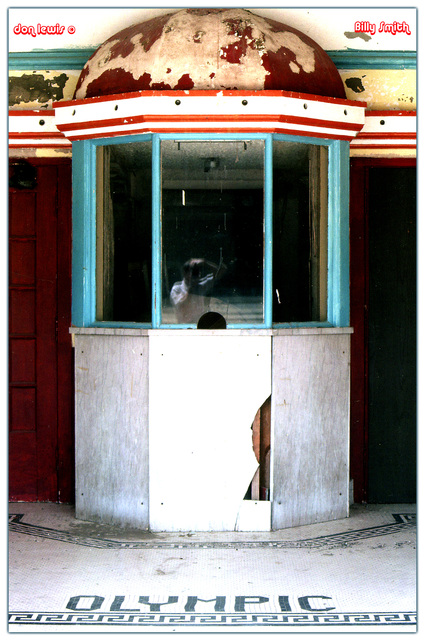 Replacing an earlier theatre, the New Olympic Theatre was opened September 29, 1926 with 750 seats. The Olympic Theatre was closed as a movie theatre in 1973 and went over to live events until 1981. In 1980 it was located in the small West Texas college town of Canyon. It had a red domed, three sided box office and at one time had light bulbs running horizontally accross the top.

Its front walk and entry had some very ornate white tile with green inlaid tile spelling out “Olympic” along with an Egyptian patterned border all along the edge.

I hope someone can describe its sign and marquee.

From the late 1970s a photo of the Olympic Theatre’s box office in Canyoy.

The New Olympic Theatre at 1511 4th Avenue in Canyon replaced its long-running predecessor on September 29, 1926 with “Brown of Harvard” as the first film. W.J. Wooten had purchased the original Olympic and extended it in 1919. In 1926, Harry Bradford convinced Wooten and the town’s local newspaper to relocate in a downtown renewal project on the town’s north side of the square. The newly built four buildings also gave the Olympic two businesses to its immediate left and right including a long-running barber shop.

At opening, the new Olympic seated 750 and its best features may have been the Arctic New Air cooling system and the pipe organ that was common to Amarillo movie-goers but not in Canyon. Films stopped in 1973 at the Olympic with sporadic live events occurring into 1981. Mr. and Mrs. Harry Swanson had considered reopening the Olympic for films in 1976 but concentrated on reopening the Canyon Drive-In which they did.