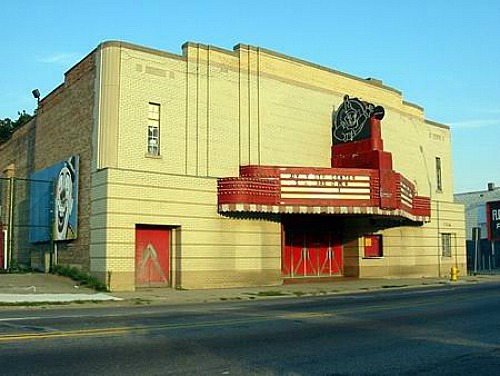 The Four Star Theatre was opened in 1938 as a sub-run theatre and remained the same until its closing in 1969. It was operated by Butterfield Theaters chain. The building now houses a youth center.

In 1963, the Four Star was operated by B&J Theatres of Grand Rapids. Allen Johnson was the president. Butterfield Circuit was listed as the film buyer and booker. Presumably that’s where the initials came from. Besides the Four Star, B&J also operated the Wealthy and Eastown, both in Grand Rapids.

They ran pictures in the 70’s, grindhouse type, was a dance bar in the 90s, I was there once in 1991. Quite large auditorium, good slant to the floor, decent sized stage screen area, could of had a good big wide screen… Deco flavor thru the building, in 91, li looked in pretty good shape, but there is no parking, a tiny lot next to building good for about 5 cars, neighborhood has gown down, when I lived in GR, it was a rough black neighborhood, but the Mexicans have moved into this area now….. im sure its still full of crime, it looks very dirty, dangerous, and seedy near this area, Divison and Burton.

The Burton Capri is just 2 blocks south of this 4 Star theatre.

Its seen its better days.

Boxoffice of August 13, 1938, says that construction had begun on the B&J circuit’s new Four Star Theatre in Grand Rapids. The architect of this neighborhood house was Frank L. Proctor. An ad for the American Seating Company in Boxoffice of December 10, 1938, also names Proctor, and has a small photo of the facade (lower left.)

All I’ve been able to dig up about Proctor on the Internet is that in 1907 he was a draftsman for the Grand Rapids architectural firm Williamson & Crow, and that the 1920 City Directory lists him as a partner of architect Henry E. Crow in Crow & Proctor, though Williamson was also listed as being in the same office. Proctor was apparently in a solo practice by the time he designed the Four Star.

Frank L. Proctor was probably also the architect of that name who, in 1905, modified plans by the firm of Winslow & Bigelow for a stable at an estate called Holmdene which is now the campus of Aquinus College. The former stable, by th en converted to other use, was rebuilt following a fire in 1978 (it is now a chapel), so I don’t know how much, if any, of the original building survives. I can’t find anything about any other buildings Proctor designed, but if the Four Star was typical of his work they’d certainly be worth a look.

The 4 Star (not Four Star) was originally a second-run house. They played on week after the first run houses downtown. This place played day and date with the Eastown and the Our. I spent virtually every Saturday afternoon and either this bigger Art Deco house or at the Burton. After the war, the difference between second run and sub(sequent)-run pretty much disappeared. B&J also operated another set of theaters that ran as sub-run houses and ran the stuff that was at these theaters one week later. This group included the Royal and the Wealthy and, if I remember correctly, the Family.